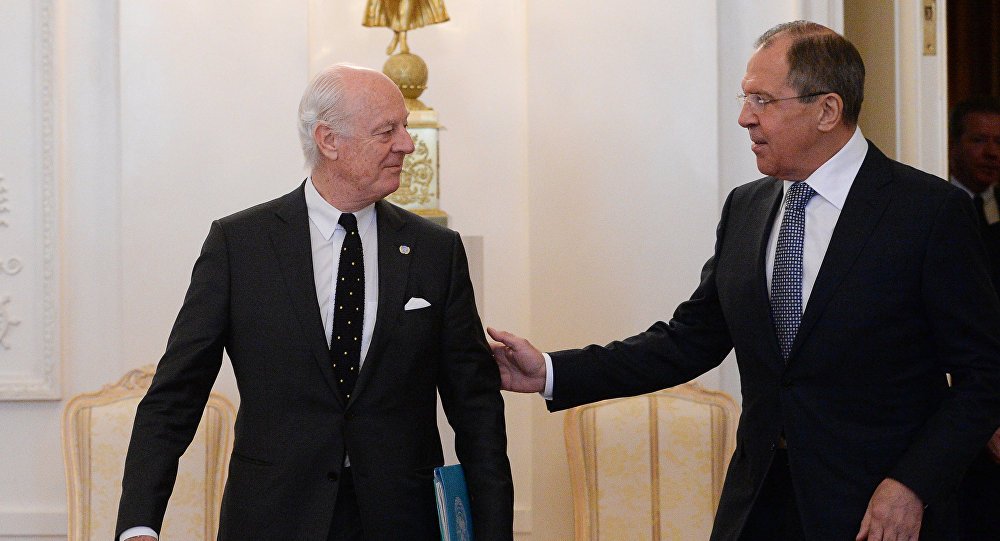 According to the Russian Foreign Minister Sergei Lavrov, UN's Syria envoy Staffan de Mistura is shying away from his responsibilities.

BAKU (Sputnik) — Russia is concerned that UN's Syria envoy Staffan de Mistura is shying away from his responsibilities by avoiding to convene a new round of intra-Syrian talks, Russian Foreign Minister Sergei Lavrov said Tuesday.

"We are concerned that the UN Secretary-General's Special Envoy for Syria Staffan de Mistura has been shying away from his duties recently, not calling another round of intra-Syrian talks, and starting to make public statements on the need for Russia and the United States to agree on how to proceed with the political settlement in Syria, and then the UN will convene a new round of intra-Syrian talks. This is the wrong approach. Replacing the intra-Syrian dialogue with a Russia-US duet is impossible and I believe this is a very harmful signal that is being sent to the irreconcilable opposition in the so-called High Negotiations Committee, which just keeps voicing ultimatums on [Syrian President Bashar] Assad's resignation and some sort of deadlines. This is not helping the case," the minister underlined.

Syria has been mired in civil war since 2011, with government forces loyal to President Bashar Assad fighting a number of opposition factions and extremists. A Russia-US-brokered ceasefire came into effect in Syria in February. Extremist groups operating in the country are not part of the cessation of hostilities.

Kerry to Visit Moscow on July 14-15 to Discuss Syria, Ukraine

Russian Pilots in Syria 'Died Having Stopped a Terrorist Advance'