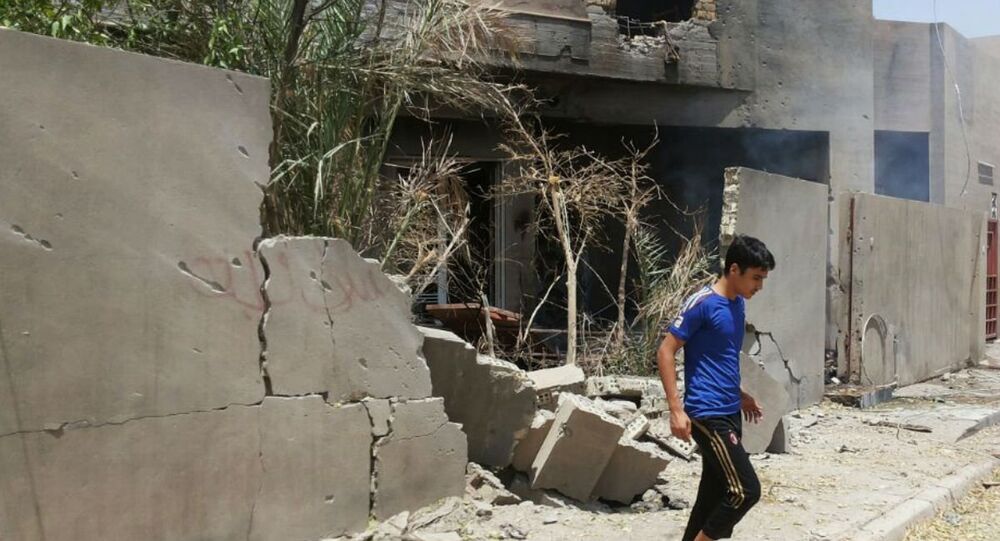 US War Crimes: Why Iraqis May Prefer Daesh to American Troops

As the US military starts an operation to “liberate” the Iraqi city of Fallujah from Daesh, Radio Sputnik talks to Nicolas J.S. Davies, author of Blood On Our Hands: the American Invasion and Destruction of Iraq, and US Marine Ryan Endicott, who took part in the US occupation of Ramadi in 2003, about who is more feared in the region.

"In fact, Iraqis in Fallujah welcomed ISIS [Daesh] when they arrived about two years ago," said Davies, "because they were living under an incredibly repressive regime--being murdered, tortured, detained indefinitely by US-trained Iraqi Shia death squads since 2004."

The occupation of Fallujah by the US military in 2003 began with the Marines capturing a local school, he said. When local people organized a peaceful protest to demand their school back, the Marines opened fire, killing about a dozen people.

"The United States destroyed Iraq," he said, "over the last year and a half, the United States dropped 40,000 bombs and missiles on people and homes and other targets in Iraq and Syria, and only 29,000 missiles and bombs were used in what is referred to as Shock and Awe, in 2003."

"When Ramadi was taken from ISIS a couple of months ago, about 70% of all buildings were destroyed or damaged," he said. He quoted the Roman senator Tacitus: "‘They create a desert and they call it peace.' That is what US airstrikes are doing."

Endicott, who was in Ramadi in 2003, recalled that during the war the US military completely destroyed the city, including civilian objects and infrastructure. For the people of Ramadi, the "liberation" from Daesh meant only "more bombs and more destruction," he said.

Speaking of his mission, Endicott explained that while their primary task was to guard the city center and conduct "combat patrols, in reality we went door to door, kicked in doors and zip-tied anyone of military age — at the age of 13 or above — and hurled them in the trucks if we suspected anything. When a US Marine got killed in action or we had a triggerman spotted, we would shut down the entire block, and we would hurl every single military-age male, zip ties on their hands, at night, screaming, machine guns in their face… And that's what we did four days a week."

"Despite claiming that there was an organized terrorist force, during eight months of patrols our platoon did not find a single weapons cache. We did not find any trace of a centralized terrorist force and centralized leadership, and it became clear that it was the people of the Ramadi who were an organized militia, the local people, tired of having their doors kicked in, families torn apart with machine guns. They got tired of our occupation; it had nothing to do with global terrorism or anything of that nature."

"It became clear that there is no such thing as an innocent civilian. Everyone was guilty, women, children," he said.

"The kids, who are now 18 or 20, lived almost their entire lives in one of the most brutal occupations in contemporary history. So to think of some force coming in, saying ‘follow us, we are going to oust US imperialism, we are going to fight people responsible for these crimes,' it makes complete sense that these youths who lived their entire life in combat would join just about any force that will promise to liberate them."

Militants Kill Over 800 Civilians, Injure More Than 1,400 in Iraq in May

Iraq Expects Oil Price Recovery in 2nd Half of 2016