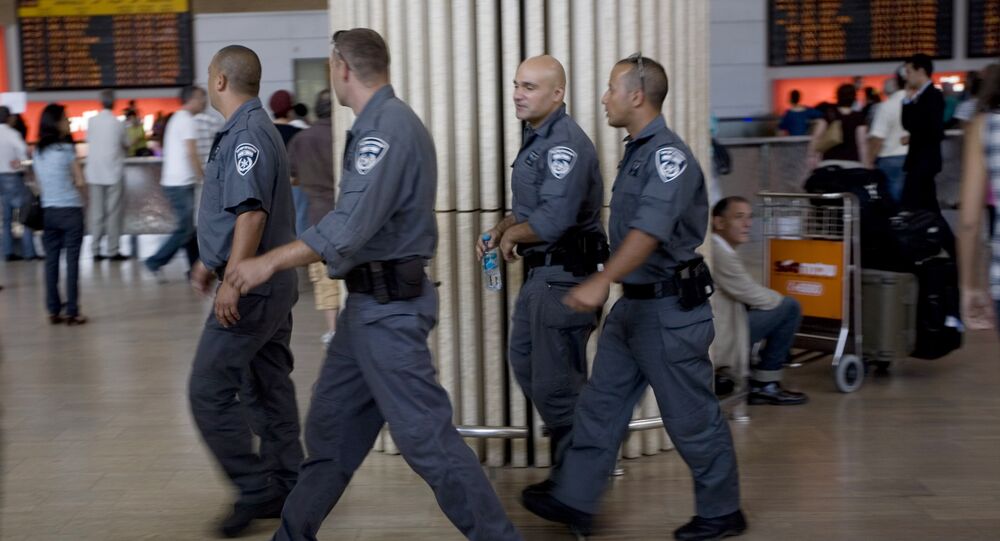 Israeli police brutally beat up an Arab supermarket worker in Central Tel Aviv after he refused to identify himself because he didn’t know who they were, according to eyewitnesses.

The border police officers were off-duty in civilian clothes when they attacked the worker, an Israeli Arab, on Sunday afternoon at the Super Yuda supermarket on Ibn Gairol Street, opposite the Tel Aviv municipality.

© AP Photo / Ariel Schalit)
Israel Frees Palestinian Journalist After Three Month Hunger Strike
The worker went to dispose of garbage when one of the policemen, dressed in shorts, demanded he identified himself. When the worker asked by what authority he was being asked to identify himself, the policeman began hitting him, witnesses said, according to the newspaper Haaretz.

“The blows were murderous, from the guy and from one of his friends. I've never seen anything like it. Teeth were flying through the air. The Arab was torn apart,” Erez Krispin, an eyewitness, wrote in a Facebook post that has since gone viral.

An old woman tried to interfere asking why they were beating him but the attackers screamed at her telling her to leave.

“Then police arrived and joined the two hooligans in beating him… I really don't know if the Arab is still alive. They pushed him into a police van, not an ambulance, and disappeared. It later turned out that the two were Border Policemen (who didn't identify themselves)” the witness said.

Another witness said, “He was beaten only because he's Muslim,” Super Yuda owner Kobi Cohen told Walla News. “His only crime was that he's not Jewish.”

Cohen further said that the original attackers were joined by plainclothes policemen and that there were as many as 10 people beating the worker.

“All the neighborhood knows him and knows that he's a good guy who isn't looking for trouble,” the victim’s father told Haaretz.

The father of the assaulted youth further said that this attack demonstrates the situation in Israel at the moment and he holds the prime minister and the public security minister responsible for such horrible incidents.

He added that the entire nation has seen the video and the police shouldn’t wait for his complaint but should check this on their own and make those cops and thugs pay.

The Israeli Police on the other hand made a statement saying that according to an initial investigation the Border Police officers identified a young man who they thought looked suspicious and asked him to identify himself. The suspect refused to identify himself and attacked the policemen, one of whom was bitten.

MK Dov Henin (Joint Arab List) filed an urgent appeal with the public security minister, asking for answers “about what appears to be, on the face of it, a lynching in broad daylight, an attack of an innocent civilian by police, only because he's Arab.”