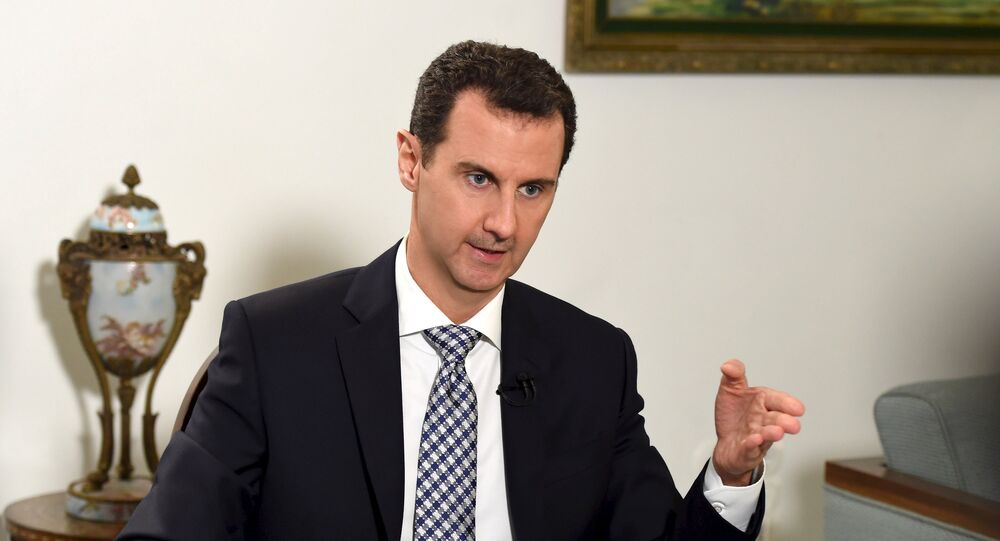 DAMASCUS (Sputnik) — Damascus is demonstrating flexibility at the Geneva talks, aiming not to miss a single opportunity for settlement, while the successes of the Syrian army and Russian military support will not be an obstacle but will instead speed up the process, Syrian President Bashar Assad told Sputnik in an interview.

"Because there are those who accuse us and Russia of this, when trying to present Russia's intervention aimed at countering terrorism as an intervention to support the president or the Syrian government, and thus, as an obstacle in the way of the political process. Perhaps this could have been the case if we had not been flexible from the beginning, if we had really persisted. However, if [you] go back to the policy of the Syrian state five years ago, we responded to all the initiatives, without exception, coming from all sides, even if they were not friendly," Assad said in an interview with Rossiya Segodnya International Information Agency Director General Dmitry Kiselev.

© Photo : Russian Defence Ministry
Clear Vision: Russia 'Only Country With Right Strategy in Syria'
"The goal is not to miss a single chance for settlement, without [first] trying it. That’s why I can briefly answer this question by saying that the Russian military support, the support provided by friends of Syria and the military achievements of the Syrian army — all this will lead to an acceleration of the political settlement, and not the opposite. We have not changed our position, not before the support from Russia nor after," he said.

In this regard, the president recalled the ongoing talks on the Syrian settlement in Switzerland.

"We went to Geneva and continue to show flexibility. However, at the same time, these victories will affect the states and powers that are hindering the settlement, because these states in the first place — Saudi Arabia, Turkey, France and the United Kingdom — are counting on our defeat on the battlefield in order to impose their conditions at the negotiations. So these military actions and successes will lead to the acceleration of the political settlement, and not prevent it," Assad stressed.

Syrian President Bashar Assad, in an exclusive interview with Sputnik, shared his assessments of the Geneva talks, military and political plans and his personal vision of the prospects of the peaceful settlement of the conflict and political transition in the country. Russian-Syrian cooperation in various fields and estimation of Russia's role in the fight against terrorism were among other topics touched upon in the interview.

"President Assad is in great shape – both intellectually and emotionally. He is inspired by the victory of his army and the retake of Palmyra, speaking ironically about Western leaders as if they swallowed their tongues and did not notice this event," Kiselev said, describing the interview.

According to Kiselev, the Syrian leader "is ready for the so-called political transition, [and] approaches it responsibly and creatively."

Syria Peace Talks Should Continue Without Demands on Assad to Resign