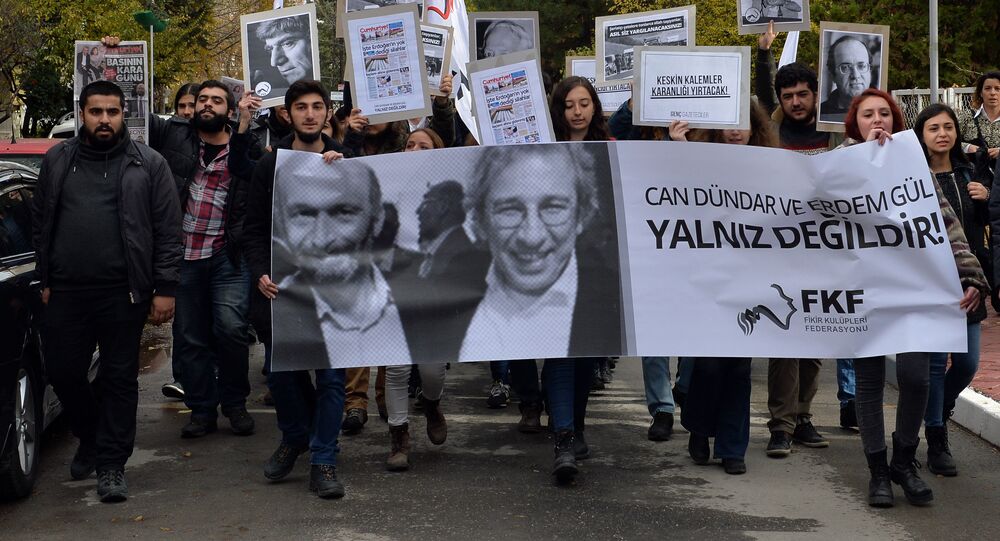 The case of Turkish Cumhuriyet newspaper's Editor-in-Chief Can Dundar and its Ankara Bureau Chief Erdem Gul who revealed the alleged supply of state arms by Ankara to rebels battling government forces in Syria has turned into a political trial, member of the opposition Republican People's Party (CHP) Enis Berberoglu told Sputnik Turkey Monday.

© AP Photo
Ankara Protests Presence of EU Diplomats at Opposition Journalists' Trial
MOSCOW (Sputnik) – Can Dundar and Erdem Gul were arrested and placed in pre-trial detention in November 2015 for publishing an incriminating article and footage in the Cumhuriyet daily on May 29. Their investigation concluded that Turkish National Intelligence Organization (MIT) trucks had carried containers with artillery shells, machine gun rounds and mortar shells to Syrian rebels.

On March 25, an Istanbul court ruled that the trial of Dundar and Gul on charges of treason and espionage would be held behind closed doors. The decision was met with protest from a number of lawmakers, including Berberoglu, who refused to leave the courtroom. As a result, the trial was postponed until April 1.

"If this process was carried out exclusively in compliance with the rules of the judicial system, our act could be considered a serious offense, but the case of Dundar and Gul was initially conducted as a political process. Consequently, our behavior should be regarded as an expression of our own political position," Berberoglu stressed.

Dundar and Gul face a maximum life sentence for revealing state secrets. Both deny their guilt and claim the state violated their rights.