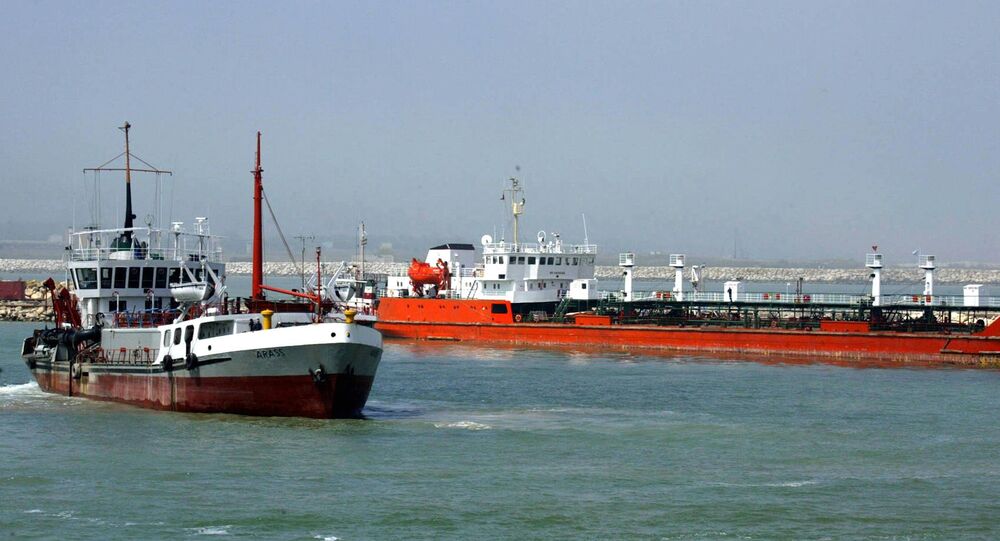 One of the most ambitious initiatives that Tehran plans to launch will see an artificial channel link the Caspian Sea and the Persian Gulf. The project, which is expected to be completed in the 2020s, is particularly interesting for Russia due to the cold spell with Turkey, but European and post-Soviet states will also benefit from it.

In Iran, "work is underway to construct a navigable channel linking the Caspian and the Persian Gulf," economic analyst Alexei Chickin observed.

The initiative itself is not new. The idea first emerged in the late 19th century and by 1890s Russian engineers developed blueprints for the navigable channel that would offer Russia and others the shortest way to the Indian Ocean bypassing the Turkish Straits and the Suez Canal in Egypt.

© AFP 2021 / Henghameh FAHIMI
A barge sprays water during the opening of the Neka oil terminal on the Caspian Sea, 340 kms northwest of Tehran in Mazandaran province (file)
© Photo : interraoexport.ru
Energetic Engagement: Russia Ready to Assist Iran in Power Plant Projects
The project was endorsed by Iran's former President Mahmoud Ahmadinejad. In 2012, former Iranian Energy Minister Majid Namjoo estimated that the cost of the project would be approximately $7 billion.

In February 2015, Chairman of the National Security and Foreign Policy Committee of the Iranian Parliament Alaeddin Boroujerdi told the Fars news agency that Khatam-al Anbiya, an engineering company owned by the Iranian Revolutionary Guard Corps (IRGC), was taking a close look at the project.

But not everyone has welcomed the idea with open arms. "The West and Turkey have directly or indirectly tried to block the waterway [from being created]. As a matter of fact, the United States imposed sanctions" on companies that have been involved in the project, Chickin explained.

Other challenges to constructing the channel that would also help to deal with droughts in central Iran include difficult terrain, the sheer magnitude of the project, as well as the required level of funding, which among other things will have to cover desalination efforts. In addition, the artificial waterway will be built in an area prone to earthquakes.

Iran Has Grounds for Closer Cooperation With SCO - Russia Ambassador