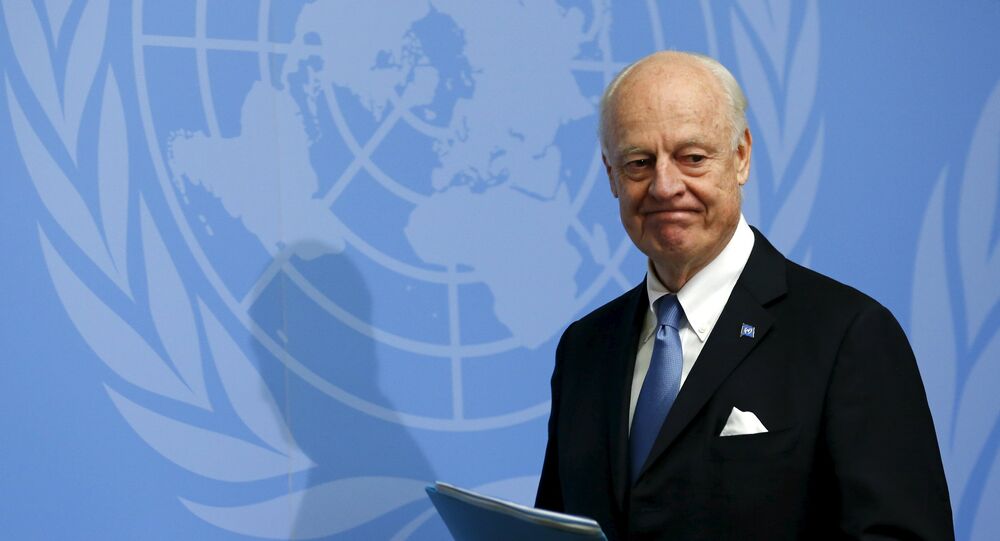 Syria shall be a democratic, non-sectarian state based on citizenship and political pluralism, the representation of all components of Syrian society, according to the final declaration of the intra-Syrian talks.

GENEVA (Sputnik) – UN Special Envoy for Syria Staffan De Mistura suggests that all parties to the intra-Syrian talks agree that Syria will be a democratic non-sectarian state, according to his Thursday final declaration.

© REUTERS / SANA
Draft Syria Talks Declaration Avoids Calling for Assad's Resignation
De Mistura has defined 12 points on which the parties to the talks in Geneva can agree and submitted the document to the parties for approval.

"Syria shall be a democratic, non-sectarian state based on citizenship and political pluralism, the representation of all components of Syrian society, the rule of law, the independence of the judiciary, equal rights, non-discrimination, human rights and fundamental freedoms, transparency, accountability and the principles of national reconciliation and social peace," the document, titled "Essential Principles of a Political Solution in Syria" reads.

"There shall be no discrimination against, and full protection of, all national, ethnic, religious, linguistic and cultural identities. Members of all communities, men and women, shall enjoy equal opportunities in social, economic, cultural and public life," the document reads.

"The political transition in Syria shall include mechanisms for credible, inclusive and non-sectarian government, a schedule and process for drafting a new constitution and free and fair elections pursuant to the new constitution, administered under supervision by the United Nations, " according to the document.

"Syria calls on all states in accordance with the relevant UNSC resolutions, to prevent terrorist groups from being supplied with weapons, money, training, shelter, intelligence or safe havens and to refrain from inciting acts of terrorism," the statement reads.

"Syrians are committed to rebuilding a strong and unified national army, also through the disarmament and integration of members of armed groups supporting the transition and the new constitution," the document reads.

"The state and its reformed institutions will exercise the exclusive right of controlling weapons of war," according to the document.

"There shall be reparations, redress, care and restitution of rights and property lost for those who have suffered loss or injury in consequence of the conflict," the document titled "Essential Principles of a Political Solution in Syria" reads.

"As peace and stability are being restored, Syria shall call for the holding of a major donor conference to gain funds for compensation, reconstruction and development of the country, and the lifting of all coercive economic measures and other unilateral actions affecting the people of Syria," the document reads.

The next round of talks between government and several opposition delegations is expected in April.

Latest Round of Intra-Syria Talks Created Basis for Political Negotiations