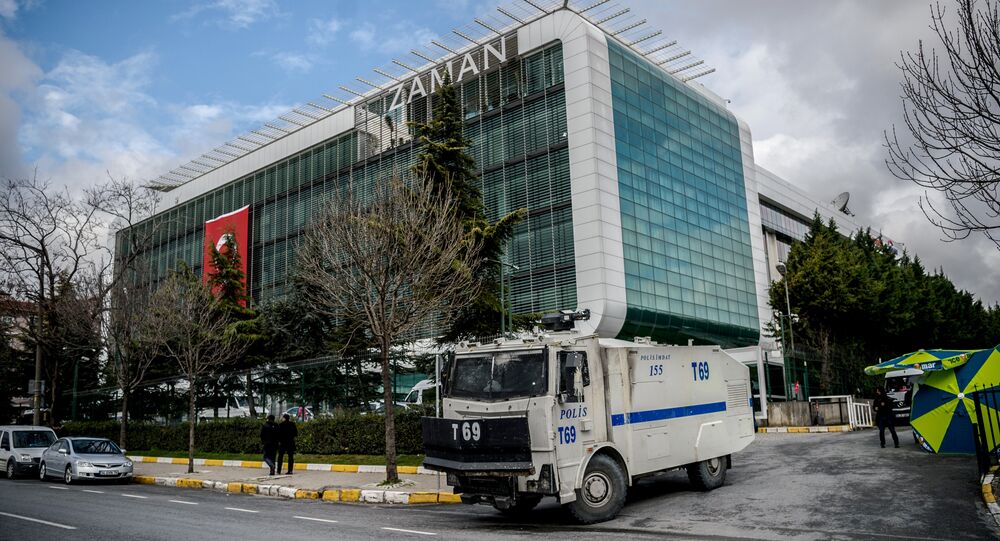 Turkish police did nit allow the chief editor and newspaper staff of Zaman opposition newspaper to enter blocked office of newspaper, according to Zaman's journalist Emre Soncan, as the protest enters second day.

​A Turkish court ordered Zaman and other outlets with the Feza Media Group on Friday to be placed under the management of government trustees. Later that day, police used tear gas and water cannons against citizens protesting the decision seen as a step to shut down Zaman.

​"Police will not let the chief editor and newspaper staff into the Istanbul office," the newspaper's journalist Emre Soncan told RIA Novosti.

Speaking from the daily’s Ankara office, Soncan said he expected law enforcement personnel to "throw us out like our colleagues in Istanbul."

Police line up journos on queue this morning before #Zaman newspaper building. Not sure who will be let in, on what. pic.twitter.com/ACE1yybGqC

​"Hundreds of our readers arrived this morning to support us, but we asked them to disperse fearing for their safety," Soncan stressed, calling the court decision "absolutely unlawful."

Turkey's crackdown on journalists and restrictions on freedom of speech have been criticized by the international community, including the United Nations, United States, the European Union, Russia and the Reporters Without Borders (RSF) organization.

Zaman is reportedly linked to the movement of US-based cleric Fethullah Gulen, which is outlawed in Turkey.