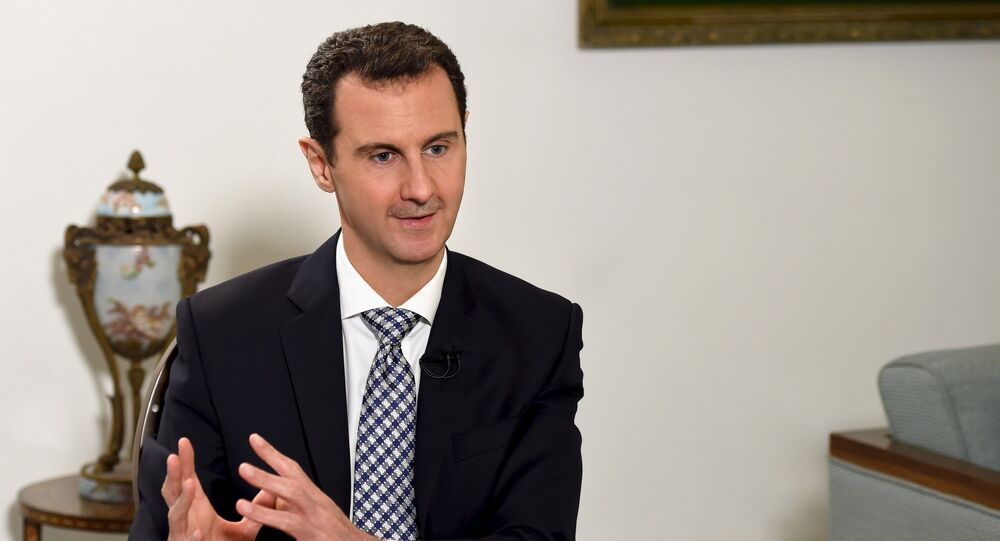 The Western anti-Syria embargo is provoking a humanitarian catastrophe in the Arab republic, Syrian President Bashar Assad said in an interview with German media Tuesday.

© REUTERS / SANA
Peace in Sight? Assad Calls the Truce in Syria ‘a Glimmer of Hope'
BERLIN (Sputnik) – The West and several Middle Eastern countries do not consider Assad to be the legitimate authority of Syria. In 2011, Washington imposed sanctions against him in the hope that he would step down.

"The disaster and nightmare you are speaking of are created not only by terrorists killing and destroying, but also by the embargo which the West imposed against Syria. It affects every citizen without exception," Assad told the ARD broadcaster.

He made a similar accusation in an interview with Spain's El Pais daily last month.

The Syrian leader urged to put an end to smuggling of weapons and other logistics from Turkey, Saudi Arabia and Qatar, which he accused of supporting terrorists.

"If these countries fulfill their obligations, I can guarantee that there will be no problems with the end of this nightmare," Assad stressed.

© AFP 2021 / RAMI AL-SAYED
Al-Nusra Front’s Shelling Kills at Least 3 in Syria's Latakia – Source
On February 22, Russia and the United States reached an agreement on a ceasefire in Syria which has been in a state of civil war since 2011.

The ceasefire took effect on Saturday. The cessation of hostilities does not apply to groups designated by the United Nations to be terrorist organizations, such as Islamic State and the Nusra Front, outlawed in a number of countries worldwide including Russia.

The truce has been backed by the UN Security Council, which adopted a resolution on Friday, shortly before the ceasefire came into force.