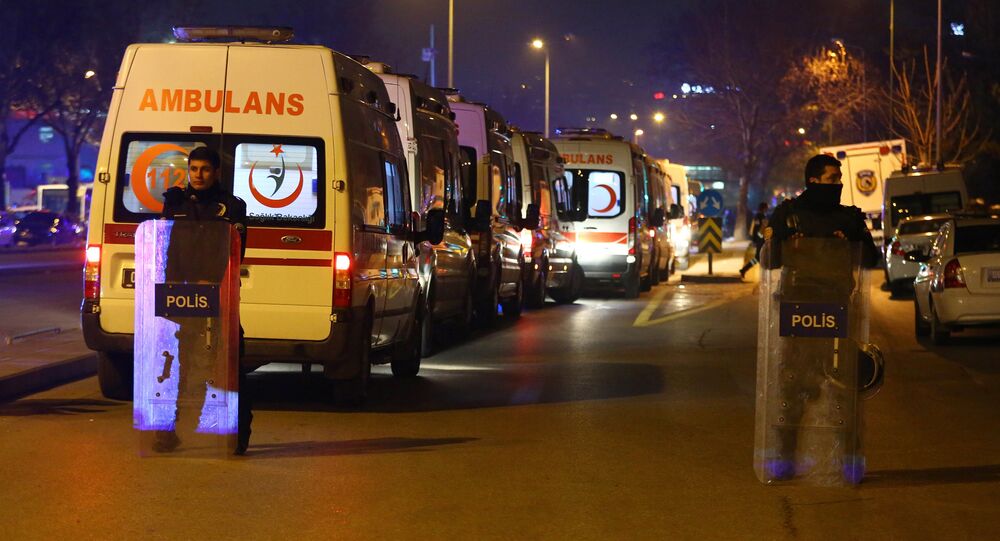 Turkey puts responsibility for the recent explosion in Ankara on the Kurdish People's Protection Units (YPG) in order to justify deployment of troops to northern Syria, the honorary president of the Turkish Peoples' Democratic Party told Sputnik on Thursday.

MOSCOW (Sputnik) — On Wednesday, a car bomb exploded outside a military housing complex near the parliament building in Ankara, killing 28 and leaving 61 wounded. On Thursday, Turkish Prime Minister Ahmet Davutoglu said that the perpetrators of the attack were linked with the Kurds.

"The Turkish government is now charging YPG with responsibility for blast in Ankara. It is unbelievable scenario for many reasons. First, YPG never looked for increased enmity on Turkey, they are just trying to equal the relations on both sides of the border. The second reason, the Turkish government is looking for an excuse to send troops to Northern Syria," Ertugrul Kurkcu said.

© AP Photo / Halit Onur Sandal
In Syria, Turkey Has Been 'Caught Holding a Grenade With the Pin Pulled Out'

The instability in Turkey escalated in July 2015, after 33 Kurdish activists were killed in a suicide blast in the city of Suruc and two Turkish policemen were later murdered by the Kurdistan Workers' Party (PKK), which led to Ankara commencing a military campaign against the group.

Over the past month, Turkish forces have repeatedly attacked YPG positions in Syria, claiming the Kurdish militia is a terrorist group that threatens Turkish security.

Earlier in February, Russian Defense Ministry said that Ankara's activity on the border with Syria pointed out at intensive preparation for a military incursion in Syria.