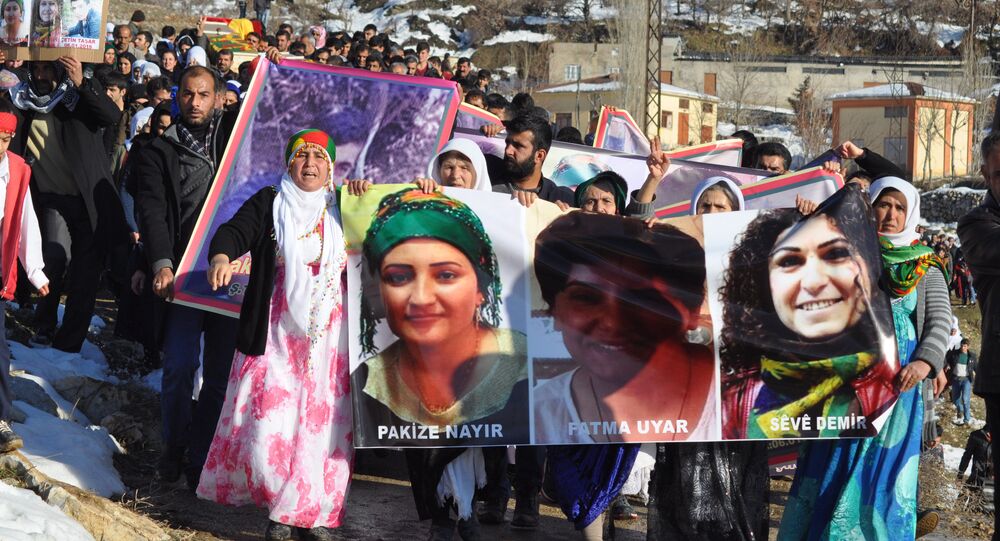 Over 500, Including Children, Killed in Turkey's Kurdistan Since Sept 2015

Over 500 people, including 50 children and 120 women, have been killed in armed clashes between the Kurds and the Turkish military over the past six months, Selma Irmak, a co-chair of the Pro-Kurdish Democratic Society Congress (DTK) and a lawmaker from the People’s Democratic Party (HDP), said.

"As far as I know, over 200 people have been killed in two months. But the number of victims has exceeded 500 since the beginning of the conflict, that is from September. Over 50 of them are children. At least 120 women and many senior people were killed… And the figures are rising," Irmak told RIA Novosti in an interview.

© AFP 2020 / STR
Cizre Crisis: Scores of People Killed in Turkey's 'Anti-Terror' Operation
According to the lawmaker, this figures will increase when the number of victims in the mainly Kurdish town of Cizre, located in Sirnak province, becomes known. Earlier in February, Turkish Interior Minister Efkan Ala said that the country's security forces had ended the military operation in Cizre.

In December 2015, the Turkish authorities declared a curfew in a number of southeastern regions where armed clashes between Ankara forces and Kurdistan Workers' Party (PKK)'s fighters continue. The Turkish General Staff has said that about 850 Kurdish militants have been killed since mid-December. Kurdish activists, in turn, argue that most of the dead were civilian victims.

The Kurds, Turkey's largest ethnic minority, are striving to create their own independent state. The PKK was founded in the late 1970s to promote the self-determination for the Kurdish community and is considered to be a terrorist organization by the Turkish authorities.