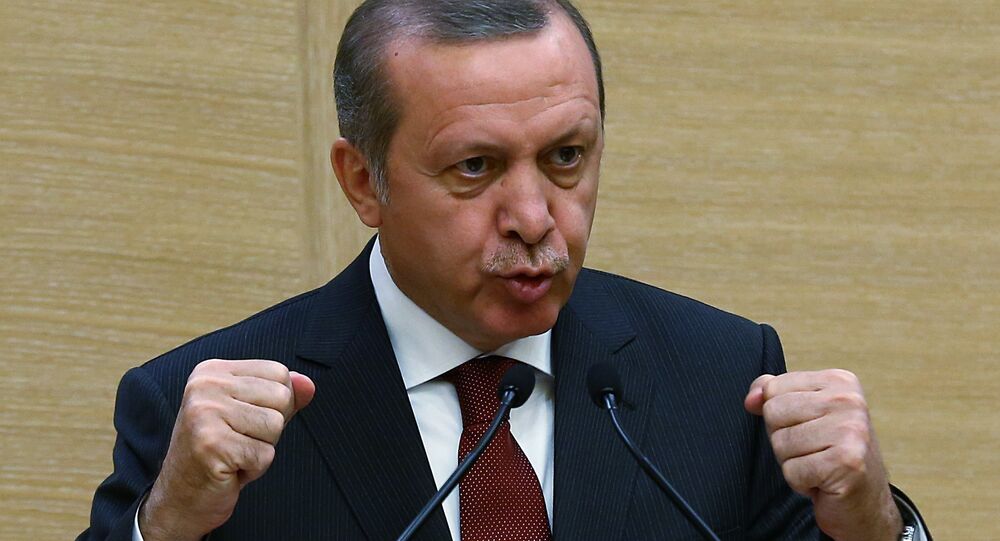 Turkish President Recep Tayyip Erdogan who used to promote himself to the West as neo-liberal and reformist has now revived "neo-Ottoman fantasies" and is tightening his grip on the opposition. Erdogan’s thirst for ultimate power risks to destroy the country built by generations before his rule, according to journalist Robert Ellis.

Turkey was a respected NATO member with prospects of EU membership.

However, under the leadership of the AKP, the situation started to change. Initially, Erdogan presented himself as a Western, reformist and neo-liberal politician. In 2012, EU foreign ministers praised Turkey as an "inspirational example of a secular and democratic country." Then, Faruk Logoglu, deputy chair of the opposition CHP (Republican People’s Party) warned that the AKP government was pursuing an authoritarian policy of gradual Islamization, leading to the erosion of Turkish democracy and secularism, the article read.

As a result, Turkey has deteriorated its ties with neighbors, particularly with Syria. Ankara even managed to alienate Moscow, after a Turkish jet shot down a Russian bomber in November 2015.

"At home, in his pursuit of untrammeled power, Erdogan has provoked a civil war which threatens to dismantle the Turkey Atatürk and his fellow nationalists created," the article read.

© REUTERS / Umit Bektas
The Geneva Talks' Big Loser? Erdogan Should Shelve 'Neo-Ottoman Dreams'
In 2005, Erdogan was the first Turkish leader to acknowledge the Kurdish question and agree a plan to settle the conflict. However, soon Erdogan disowned the agreement and launched a crackdown against Kurds. A series of anti-Kurdish attacks hit the country, and the government was suspected of having a hand in the attacks.

The situation was further aggravated when the PKK’s youth wing, the Patriotic Revolutionary Youth Movement, declared autonomy in a number of towns in Turkey. The response from the government led to a great number of refugees and civilian casualties in besieged towns. The Human Rights Watch has termed it "the abusive and disproportionate use of force."

Nevertheless, there is a zero sum game for Erdogan until Kurdish militants are finally destroyed. During the November elections, Erdogan called on the Turkish people to unite against terrorism and won the support of half of the electorate.

"The losers are the Turkish people, as Erdogan has cracked down on every form of dissent, calling critics and political opponents 'traitors' and 'terrorists'," the author wrote. "The AKP now has 317 out of the Turkish parliament’s 550 seats, and a new election could be held to gain the 330 seats needed to hold a referendum on a change to the constitution, giving Erdogan the ultimate power he has so long hankered after."

Crackdowns against politicians, scholars and journalists have become a worrying trend of the domestic policy conducted by the AKP.

© AP Photo / Emrah Gurel
Erdogan's Crackdown on Freedom of Speech Turns Into All-Out Witch-Hunt
"Turkish media is now under severe pressure from the authorities, with the agenda shaped by the government," Ertugrul Gunay, the former Turkish minister of culture and tourism, told Sputnik Turkey.

"How can one talk about the formation of a healthy, free society, and the establishment of a modern constitution, if the country doesn't have a free press?" he said.

The ruling party is making every effort to silence the growing number of domestic problems, especially the Kurdish issue, the journalist who writes under the pseudonym John Butler notes in his article for The Spectator.

"A statement issued this month by the Izmir Society of Journalists claimed that 31 journalists were in prison while 234 were in legal limbo awaiting trial. Over the course of last year, they added, 15 television channels had been closed and 56 journalists refused accreditation," he wrote.

Istanbul-based independent scholar Dr. Can Erimtan underscored that Erdogan and his party are taking steps toward transforming Turkey in an authoritarian police state.

"In the end, one can only say that Recep Tayyip Erdogan… and his party apparatus appear to have transformed the country's National Intelligence Organization (MIT) into a personal Praetorian Guard to be used (or abused) in the pursuit of various arguably unsavory policy aims and 'state secrets'," he wrote in a recent article for New Eastern Outlook.