A group of 132 prominent Turkish scientists, artists and actors signed a petition calling for the authorities to rescue the large of group wounded people who have been trapped for over a week now in a basement in the town of Cizre. 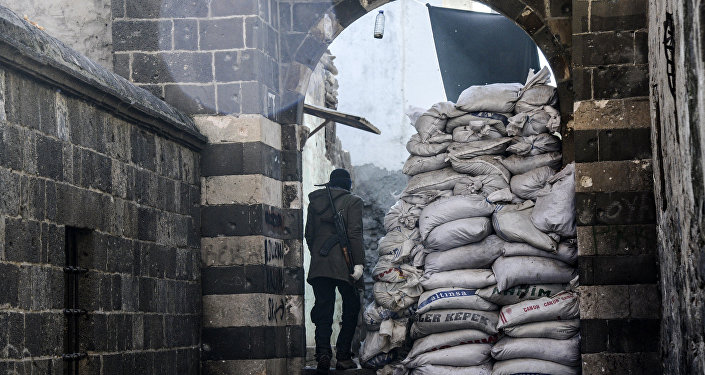 © AFP 2019 / Ilyas AKENGIN
Military Operation in Southern Turkey 'Reminiscent of Spanish Inquisition' - Turkish Journalist
The petition is titled 'Humanity is dying before our eyes in Cizre' and ends with a warning: "If you won’t save them, we will!"

Orhan Alkaya, a famous Turkish actor and one of the men who signed the petition, told Sputnik why he supported this initiative.

"The situation is becoming more and more surreal with each passing day. It’s like the entire southeastern region of the country became a stage for a tragedy performance," he said. "Turkey became a country where civilians have to carry a white flag when walking in the streets."

Alkaya explained that the petition contains a simple message – if the government is unable to fulfill its duty and save those people, it shouldn’t prevent others from mounting a rescue effort.

"A man with a conscience cannot remain indifferent when he sees how injured people are being denied the most basic medical attention, and in so doing sentencing them to a painful death; how the bodies of the civilians killed during fighting can lie in the streets for weeks as people are unable to bury them. Only people completely devoid of compassion and conscience can look upon this impassively," he said.

Orhan Alkaya also remarked that he’s not afraid of any consequences of backing the petition.

"One of the primary goals of a totalitarian dictatorship is to instill a sense of pathological fear among the populace, which is exactly what happens here. No, I’m not afraid of the consequences of my actions, and why should I? A man has only one life and he can live it with honesty and dignity or not. This is a choice that each and every one of us has to make," he said.

Ankara continues to bombard the Kurdish town of Cizre in southeastern Turkey and has shown no indication that it intends to resolve the crisis peacefully. At least 19 injured people remain trapped in a dilapidated apartment building in the town. Meanwhile, the authorities appear unable or reluctant to provide medical aid to the survivors and to retrieve the remains of those who were killed during the siege.

The Turkish government has been stepping up its military operations in the mainly Kurdish areas located near Turkey’s borders with Syria and Iraq since December. Erdogan has vowed to continue the military campaign until the area is cleansed of PKK militants.