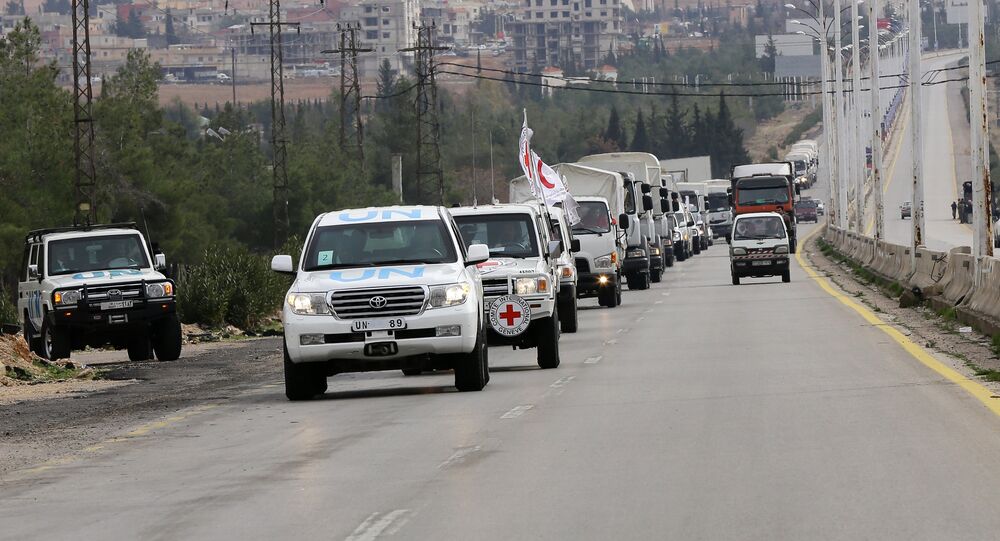 Trucks with humanitarian aid have arrived in the besieged Syrian cities of Foah and Kafraya in the northwest of the country, a source told Sputnik Monday.

© Sputnik / Dmitry Astakhov
Russia to Allocate $2Mln to UN Fund on Syria Humanitarian Aid in 2015
On Thursday, the United Nations said it was preparing to deliver humanitarian assistance after Damascus had approved the organization’s access to three Syrian cities, Foah and Kafraya among them. On Sunday, an informed source told Sputnik that Damascus and armed opposition groups operating in Syria had reached a consensus on allowing deliveries of humanitarian aid to the cities.

"A convoy with humanitarian aid has arrived in the besieged cities of Foah and Kafraya near Idlib, occupied by armed militants. A second convoy has started to move toward the city of Madaya," the source said.

RT journalists on the scene also report that the first convoys carrying water and food supplies have finally reached Madaya.

According to RT's Murat Gadziev, a total of 39 trucks carrying humanitarian aid are expected to arrive in the city.

Local residents said that rebels are charging them $250 for a kilogram of rice, RT reports.

It's worse than the rumours: #madaya civilians say rebels charged 100,000 SP ($250) for kilogram of rice pic.twitter.com/HhvQ6Inbg4

Since 2011, Syria has been in a state of a civil war, as government forces has been fighting against opposition groups, as well as extremists operating in the country.

In December, the UN Security Council unanimously adopted a resolution outlining a peace process for Syria. The resolution supported a ceasefire in Syria and called on all parties to the Syrian conflict to allow humanitarian agencies to deliver aid to those in need.