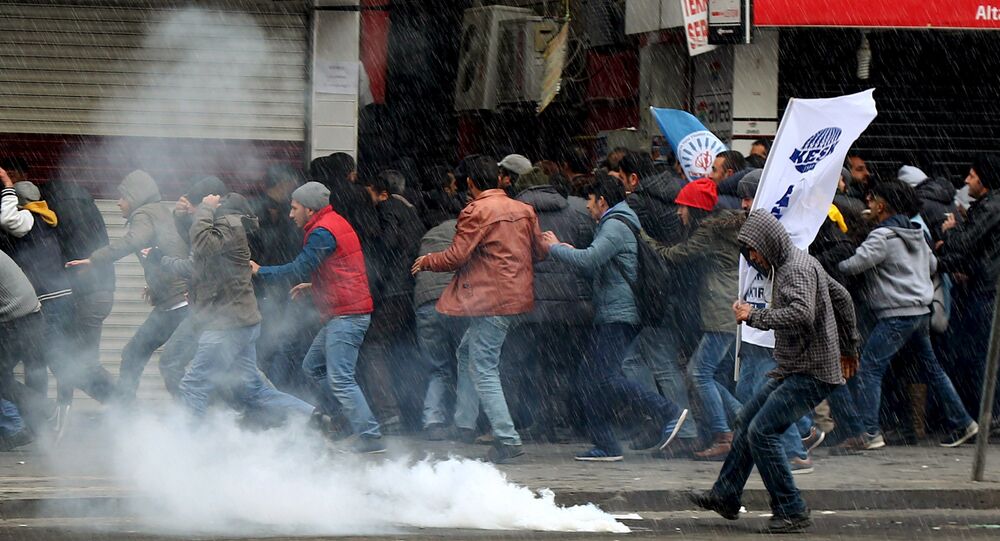 © AP Photo / Cagdas Erdogan
On Brink of Civil War? Protests Resume in Turkey Amid Ankara's Assault on Kurds
Turkish police used tear gas and water cannons indiscriminately against the Kurdish demonstrators, while some of the protesters fought back by throwing stones at riot police vehicles, RT said.

People gathered in the city's central district to protest against a curfew, which has been in effect in the city since December 2, and attempted to march through the streets of the city's Sur district. The police, however, quickly blocked the demonstrators and began dispersing the crowd using violent methods.Urgent Call for Solidarity & Action frm Diyarbakir Mayor @GultanKisanak on current situation https://t.co/89SoxLBOx8 pic.twitter.com/52D54oOfts

Local residents have been struggling due curfews and demanded the government to lift them, so they could return to a normal life.Kurdish protesters clash with Turkish police in downtown #Diyarbakir during a rally against the recent curfews impo… pic.twitter.com/kIcC3iJ8GV

​"No one can go outside. Our water is running out. The food at home is running out. The telephone lines have been cut. The situation here is terrible," said Uzay Bulut in an article written for the US-based think-tank Gatestone Institute, citing Osman Tetik, a local resident and representative of the Education and Science Workers' Union in the town of Cizre.

Bulut added that the Turkish government deployed soldiers, including snipers, who are now guarding the streets of Cizre.

The government announced on Monday that some 214 PKK members were killed in southeastern districts during clashes since December 15, Hurriyet Daily News reported.

However, according to the Human Rights Watch, almost half of these people were civilians, RT said.