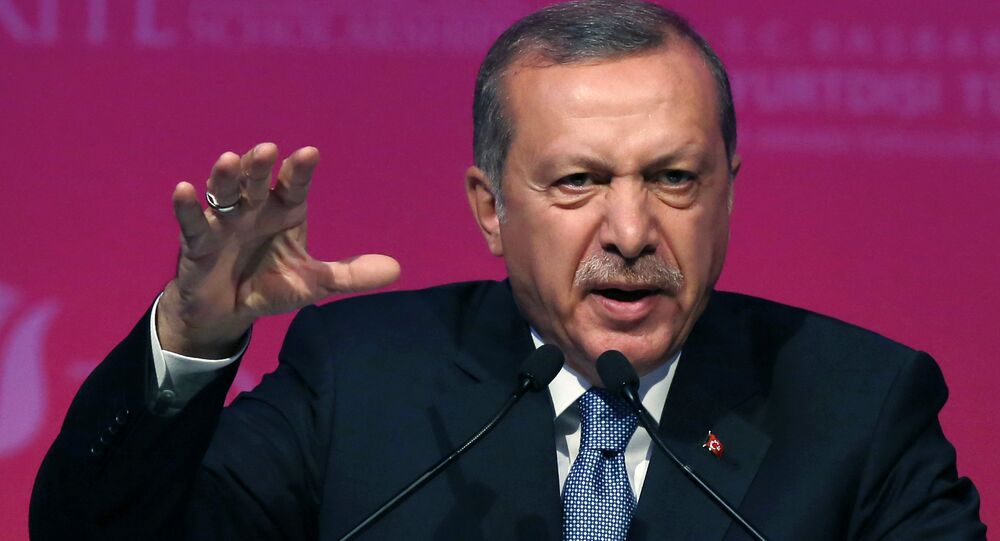 On Sunday, Erdogan lashed out against Iran, accusing Tehran of fueling the ongoing Syrian conflict by supporting the country's president, Bashar al-Assad. According to the Turkish president, Tehran has adopted "sectarian" policies in Syria and if it didn't support al-Assad, the Syrian conflict would have been long finished.

But Erdogan's claims are groundless, because Iran supports al-Assad to ensure security in the Middle East and to literally save the lives of millions of Syrians.

"Iran supports the legitimately elected president Bashar al-Assad so the power in the country doesn't fall into the hands of extremists and terrorists, and eventually chaos would engulf the country, turning Syria into a second Libya," Emad Abshenass, Iranian political scientist and the editor-in-chief of the Iran Press newspaper, told Sputnik.

If Daesh (Islamic State) or al-Nusra Front take control of Syria, it would be certain genocide for Alawites, Christians and other minority groups in the country, as the Sunni extremists would exterminate these groups, Abshenass said, adding that Iran wouldn't allow that to happen.

"Iran wants a stable Middle East, which Turkey is trying to break down," Abshenass told Sputnik.

© AP Photo / Kevin Frayer
Iran Has 'Irrefutable Evidence' of Turkey-Daesh Cooperation
Another expert on Middle Eastern politics Reza Moghaddasi said that the West, in particular the United States, created and fueled Islamic extremism to establish their control over the region. In this scenario, Turkey and Saudi Arabia are playing the role of Washington's puppets, helping to spread chaos and the policies of divide of conquer across the region.

Moghaddasi also criticized Erdogan, asking that if Iran put its weight behind al-Assad based on the sectarian divide narrative, then how could one explain Tehran's support for Iraq or Yemen. This shows that Iran isn't seeking any "religious" objectives, but works to keep the entire region stable, the political expert added.