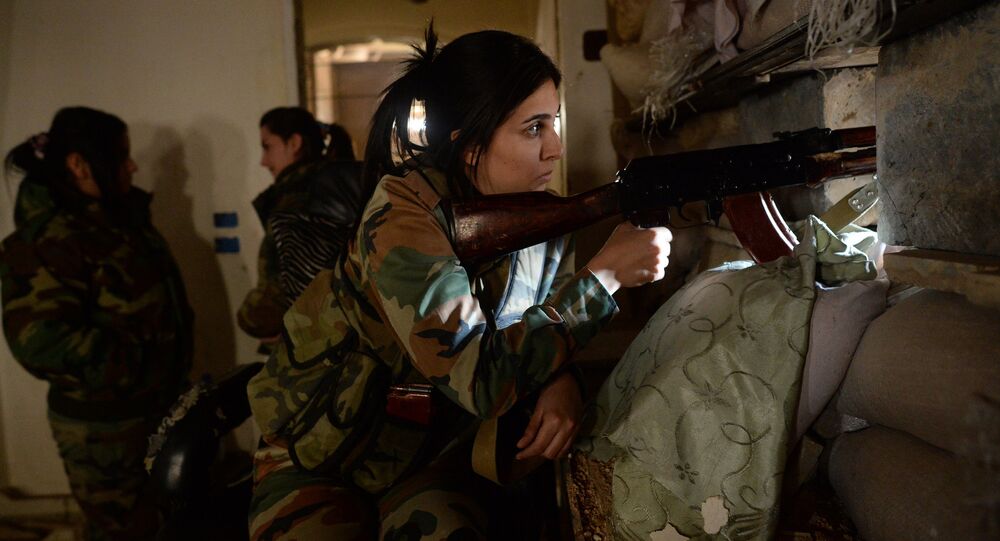 The Syrian army female battalion continues to fight on the forefront of the war against Daesh, helping to drive the Islamist militants from the outskirts of Damascus.

© Photo : Youtube/Ruptly TV
Syrian Female Battalion Training to Give Daesh Hell
The Syrian Arab Army continues its battle against the Daesh militants. And it turns out that Syrian women are just as eager as Syrian men to defend their country against the enemy.

Al Mahavir is an all-volunteer unit. After undergoing a special training course, the female soldiers immediately join the war effort, fighting against the Daesh forces in hot spots across the country, including the pitched battle fought in the city of Daraa near Damascus.

"We came to fight by our own volition. We knew that it would be difficult, but still we came," one of the servicewomen told RT.

"When I joined the battalion, I clearly understood that Syria is my mother. And if the mother is ill, her daughter must be at her side," said another. "Syria is ill now. And that’s why I’m here, in this battalion. I will fight for my mother. I will cure her so that we can leave together in peace like before."

© AFP 2021
Just Some Ordinary Terrorists: Military Action Strips Daesh of Mystique
It took considerable time to train the battalion, but now it’s a force to be reckoned with, capable of accomplishing the most difficult of assignments. According to its commander, the troops’ morale remains high despite the fact that several of the female soldiers have already been killed in action as well as during the enemy terrorist attacks.

The men of the Syrian army praise the courage of their female comrades-in-arms.

"We’re willing to accept new recruits. We invite volunteers to our female battalion. The woman’s role is not limited to childbirth," one of the servicemen told RT. "There are true heroes among women. They display courage on the battlefield and while giving birth. That’s what infuses a woman with greatness. Allah gave them qualities that men don’t have."

"It’s no secret that Eastern society generally doesn't accept women with guns fighting alongside men. But we’ve proven our worth and our ability to defend our country," one of the servicewomen added.