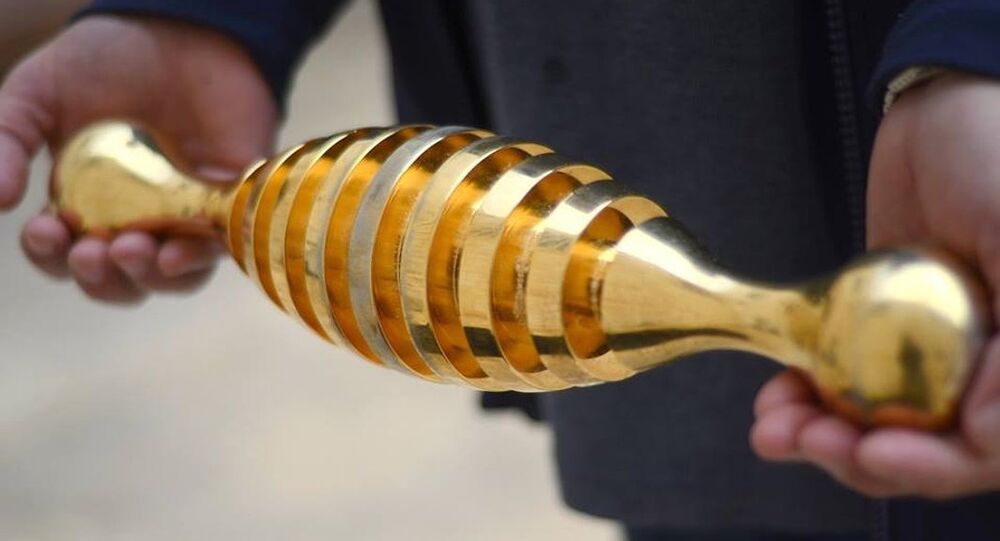 After months of fruitless examination of a mystery object discovered in a Jerusalem cemetery, the Israeli Antiquities Authority found the answer by asking visitors to its Facebook page.

© AP Photo / Mahmoud Illean
Jewish Extremist Demands Ban on 'Vampire' Christmas in Israel
Puzzled Israeli archaeologists looking to identify a specter-shaped relic discovered in a Jerusalem cemetery were helped by visitors to the Israeli Antiquities Authority's (IAA) Facebook page, where users gave their best guess as to what it could be.

The object weighs 8.5 kg and was discovered in a building at the cemetery, which is also an important archaeology site with remains of the Roman, Byzantine and Crusader periods, and handed to the IAA for examination.

However, after six months of investigation, the archaeologists were still none the wiser as to what the object could be, or even from what era it originated. As a result, they decided to put the mystery to users of social media.

The Facebook post from the Israeli Antiquities Authority, asking for suggestions from the public about what the object could be.

Among the ideas suggested by visitors to the Facebook page were massage roller, olive press, curtain rod or dough cutter. However, within hours, some users had identified its real use.

"Do you know which era this artifact is from?" asked one. "It looks like it was done by CNC machine."

"It seems like CNC (Computer Numerical Control) manufacturing so there are 2 options. If it's that old it's alien technology and if not, then it isn't," said another.

One user provided the link to where the object is sold on the internet by a German company, Weber Bio-Energie Systems. It calls the product an "Isis Beamer," used to "harmonize geopathic and electromagnetic radiation fields."

© Photo : Israel Defense Forces press-service
Turkey to Seek Damages for Members of Freedom Flotilla Killed by Israel
The product can be bought in chip form for mobile phones, or in various sizes to tackle electromagnetic radiation fields. An Isis Beamer with a radius of two meters, "Useful for your home, your PC workstation and when travelling," costs 75 Euros, while larger versions cost up to 1,115 Euros.

On Tuesday the IAA confirmed the mystery was solved, and thanked Micah Barak from Italy for being the first to identify the object "as a device that is supposed to provide 'energetic protection' and is designed for use by naturopaths and those involved in New Age energy healing."

The device is called Isis after the Egyptian goddess, who according to Egyptian mythology was the goddess of healing, magic and nature.

"We hope that those responsible for hiding the object in the cemetery will contact us, tell us why it was buried in the ancient structure and to whom amongst the dead and buried they wanted to give positive energy," said the IAA, which has invited Barak  to meet with the organization on his next visit to Israel.