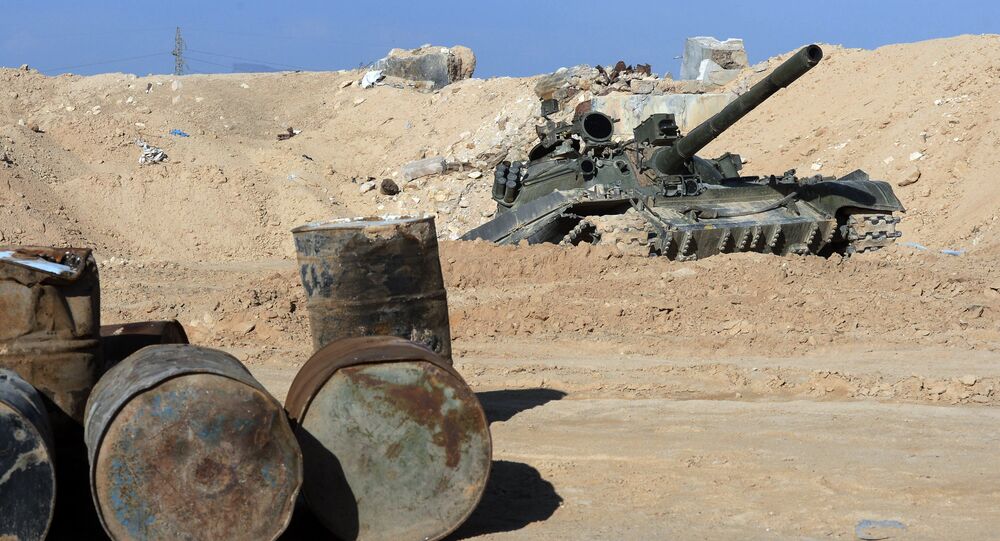 The Syrian Army has reportedly managed to drive Daesh militants out of vast areas along the strategic Damascus-Homs highway in central Syria.

© Sputnik / Mikhail Voskresenskiy
Closing In On Palmyra: Syrian Army Regains Strategic Highway From Daesh
Syrian forces have regained control of vast areas along the strategic Damascus-Homs highway in central Syria from Daesh terrorists, according to the Iranian news agency FARS.

"The Syrian Army expanded its control on the Eastern side of the Damascus-Homs Highway in Harasta," sources said.

According to the sources, the army finally managed to take "full control over the farms along the road connecting Nour al-Sham school and Duma" after fierce clashes with Daesh terrorists.

Dozens of militants were reportedly killed and many more wounded in the clashes that came amid reports that the Syrian forces had detected and destroyed a tunnel used by the Daesh terrorists in the area.

The Syrian Army and National Defense Forces have been fighting to seize back full control of the entire Damascus-Homs highway for one month now.

In mid-November, government troops captured a strategic checkpoint of the southern side of the Damascus-Homs highway after destroying the militants' strongholds in Eastern Ghouta.

The Russian air campaign kicked off on September 30, when more than fifty Russian aircraft, including the Su-24M, the Su-25 and the Su-34 commenced precision airstrikes on Islamic State targets in Syria at the behest of Syrian President Bashar Assad.