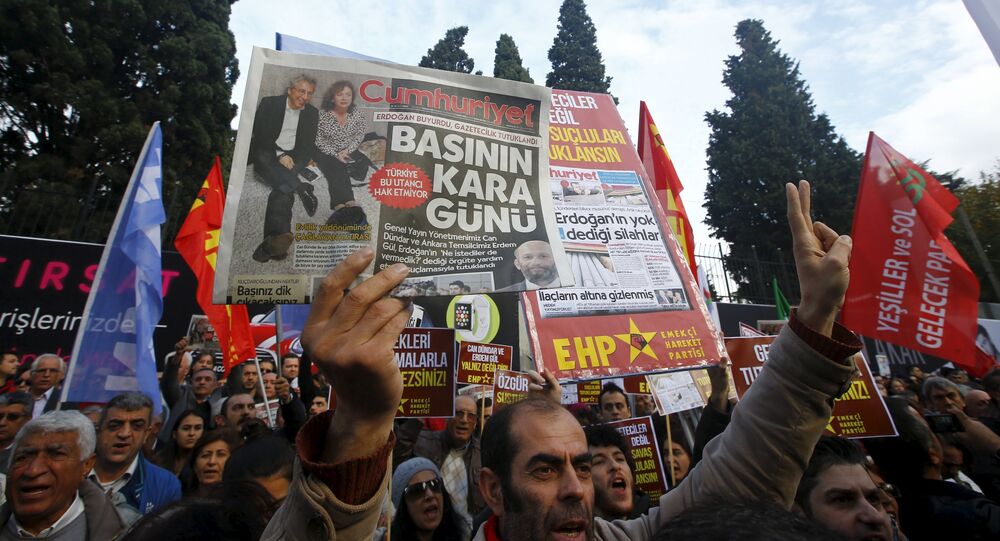 The authorities in Turkey are responsible for brutally mistreating journalists, according to Reporters Without Borders (RWB) release.

WASHINGTON (Sputnik) — The authorities in Turkey must eliminate the espionage indictments against two practicing journalists and free all others that have been detained, Reporters Without Borders (RWB) in concert with other groups said in a joint release on Tuesday.

“The signatories… urge them to free Can Dundar and Erdem Gul without delay, to drop all charges against them, and to free all other journalists who are currently detained in connection with their journalism or the opinions they have expressed,” the joint release stated.

Also “the signatories accuse the Turkish authorities of ‘persecuting journalists of all colors in an increasingly ferocious manner,’”  according to document.

© East News / AP Photo
Turkish Newspaper Faces Sudden Tax Inspection After Arrest of Two Reporters
On November 26, Cumhuriyet newspaper editor-in-chief Can Dundar and its Ankara representative Erdem Gul were arrested on charges of espionage and treason after the media outlet published a news report with photos of trucks carrying weapons bound for Syria.

“Many journalists have been detained on spurious charges of terrorist propaganda and insulting President [Recep Tayyip] Erdogan,” the joint release stated.

Thirteen rights groups signed the release including the International Press Institute (IPI) and the Index on Censorship as well as 13 public figures including US journalist Carl Bernstein and Turkish pianist Fazil Say.