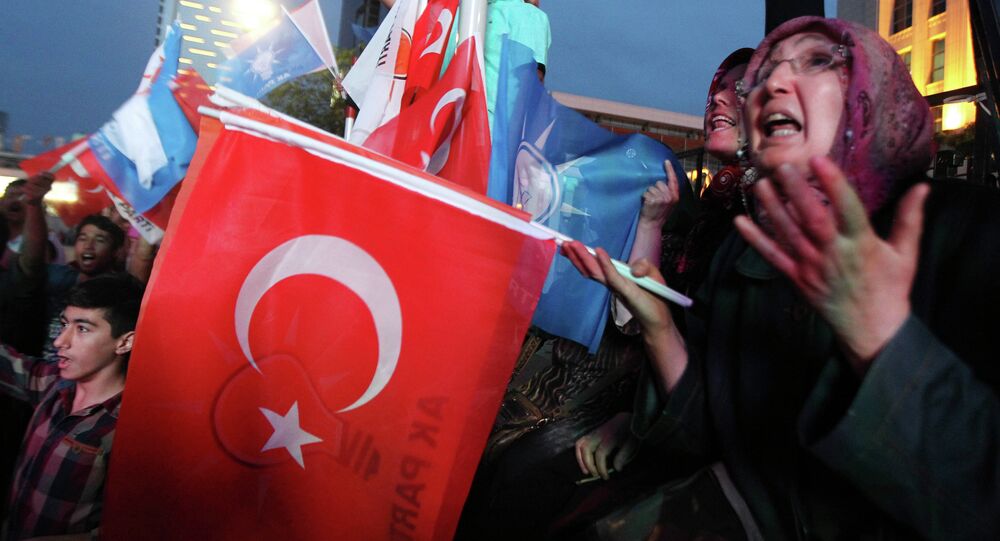 Europe needs to take a tougher stance towards Turkey, as Ankara encourages the rise of Islamic extremism, which it uses to consolidate its own political influence in the Middle East, French journalist Pascal Celerier wrote for Boulevard Voltaire.

Turkey's support of ISIL, the downing of the Russian Su-24 bomber and the interruption of a moment of silence dedicated to the victims of the Paris terrorist attacks with boos and yells of "Allahu Akbar" at a stadium in Turkey shows that the Islamic side of Turkey is strong and present, and the country isn't on the same page with the EU when it comes to issues of Islamic fundamentalism, the author said.

Turkey is dreaming of becoming a great power once again. The country is essentially "an Islamic caliphate" which is currently in the process of trying to re-establish the Ottoman Empire, Celerier argued.

The world might soon witness a confrontation between Ankara and Tehran, as the two cities would compete with each other to become a leader of a new empire in the Middle East, the French journalist said.

There would be a rise of new, more politically and economically powerful "Islamic caliphates" in the future. Turkey will be one of them, the author said.

© AP Photo / Yiannis Kourtoglou
Turkey's Downing of Russia Su-24 May Add to Tensions in Region
The French government needs to understand that ISIL is simply a tool in the grand scheme of geopolitics. ISIL isn't a "third Reich" and it would be defeated soon; however a victory over ISIL would only be a part of a bigger problem that France and the EU have in front of them — the rise of global Islamic fundamentalism in its aggressive and expansionist form, Celerier said.

The development of Islamic banks, media, educational programs and charities all of which support fundamentalist Islamic teachings around the world is the real risk that Europe is facing. Meanwhile ISIL is simply an artificially created organization to conceal and distract the attention of the West from a real threat that has been quickly rising behind the scenes, Celerier argued.