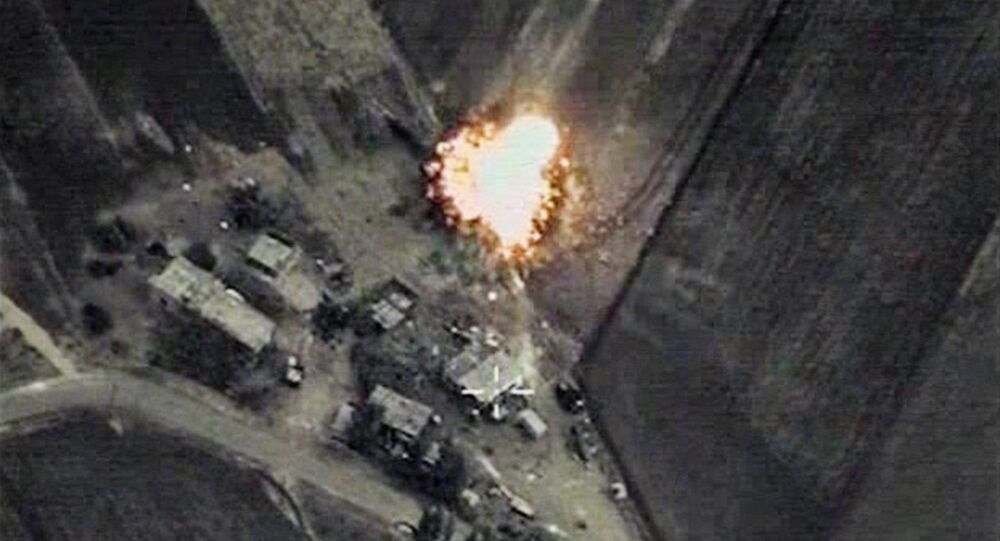 Russian warplanes have carried out 107 sorties and hit 289 terrorist targets in Syria over the past 48 hours, expanding the operation range from six to eight provinces, the Russian Defense Ministry said Friday.

According to Konashenkov, 184 terrorist fortified areas, 50 strongholds with military equipment and weapons and 34 command centers were destroyed by Russian airstrikes.

The Russian Aerospace Forces destroyed an ISIL ammunition depot in the Damascus province, which was supplying terrorists with rockets to shell the Syrian capital.

"Near Mgar in the Damascus province, a strike was conducted on an ISIL militants' ammunition depot. Small batches of rockets aimed to be used for attacks on the Syrian capital were secretly transferred to this site."

A Russian Su-34 bomber launched a pinpoint strike by a BETAB-500 bunker buster bomb on an ISIL ammunition depot in Syria's province of Daraa, the Russian Defense Ministry spokesman said, adding that explosives started to detonate leading to the total destruction of the facility.

An ISIL stronghold and the terrorist group's ammunition depot was destroyed by a Su-24M military jet in the Homs province. "As a result of a pinpoint strike, engineer installations, three mortar detachments and a field ammunition depot were destroyed.

Moreover, a major Nusra Front ammunition depot was destroyed in the Hama province as a result of a Su-34 bomber's strike. Meanwhile, in the Idlib province, the Russian Aerospace Forces launched airstrikes on a Nusra Front plant, which had been producing rockets and explosive devices.

"In the city of Maarrat al-Nu'man in the Idlib province, a Su-34 bomber destroyed a factory producing ammunition for the Nusra Front [terrorist] group. The militants manufactured missiles, hand-made explosive devices and equipped vehicles with explosives at this site. As a result of the airstrike, both buildings, where the factory was located, were completely destroyed."

Moreover, Russian aviation launched a strike on a convoy of armoured vehicles in the Aleppo province, which belonged to Nusra Front terrorists. As a result of the airstrike,  two tanks, three armored vehicles and four vehicles equipped with heavy machine guns were destroyed.

A Nusra Front command center was destroyed in the Syria's province of Latakia, the general said.

"In the Latakia province, a Nusra Front command and surveillance center was destroyed. The building occupied by terrorists was completely destroyed by a pinpoint strike."

Terrorists fighting in the Latakia province, where the Russian air group in the Syrian Arab Republic is deployed at the Hmeymim airbase, have received an order to urgently evacuate modern arms and assets, Konashenkov said.

"According to the data obtained by the Information Center in Baghdad, field commanders of armed groups operating in the province of Latakia received an order to urgently evacuate all valuable property and modern weapons deep into the territory controlled by terrorists."

He added that local citizens in Syria's provinces of Latakia, Tartus, Homs, Hama, Idlib and Damascus were joining self-defense groups fighting against terrorists. "At the moment, these units are nearly 4,000 strong."

"After necessary training, volunteers are involved in addressing issues aimed to defend residential areas, important sites’ and transport routes’ from terrorists. Such assistance from the civilian population the regular army to accumulate troops behind the front line for launching an offensive against terrorist-controlled areas."

Russian aviation destroyed a column of fuel tankers with crude oil, which was heading toward Iraq, the Russian Defense Ministry said.

"As a result of the aerial reconnaissance near Al Mayadin in the province of Deir ez-Zor, a convoy of fuel tankers heading toward the Syrian-Iraqi border was uncovered. According to data, the vehicles transported crude produced in the ISIL-controlled oil fields to refineries of terrorists located in Iraq."

#SYRIA #MAYADIN According to received data, vehicles were transporting crude oil from #ISIS oil-fields to refueling plants in #IRAQ

According to Konashenkov, crude oil was to be later smuggled to neighboring countries and sold on the "black" market to finance the terrorist organization's activities.

A strike carried out by a Su-34 bomber completely destroyed the convoy of fuel tankers, Igor Konashenkov said.

Russia 'Has No Right' to Discuss Assad's Resignation With Syrian Leader