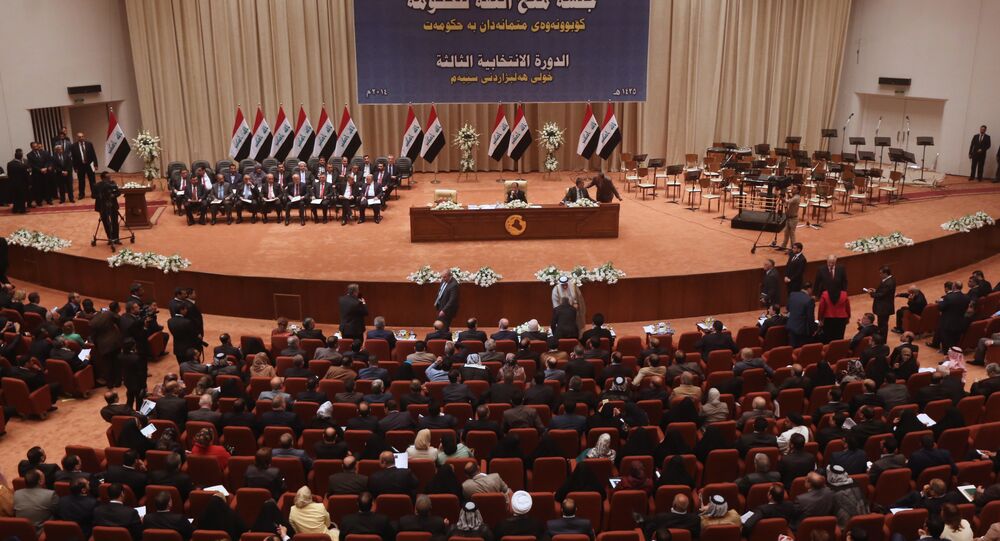 Iraqi Parliament to Vote on Request for Russian Airstrikes

According to a member of the State of Law Coalition, Iraq's parliament is planning to vote whether or not the country will request the support of the Russian Aerospace Forces in fighting the Islamic State militant group by the end of this month.

Iraq's parliament is planning to vote to request support from Russia in fighting the Islamic State (ISIL) by the end of the month, a member of the State of Law Coalition told Sputnik on Wednesday.

The State of Law Coalition is Iraq's largest political party, led by former Prime Minister Nouri al-Maliki, and is part of the ruling coalition. The legislator also told Sputnik that the vote is expected to pass with majority support. The US has been increasingly concerned about Russian influence in Iraq, and has sent envoys to the country to dissuade further cooperation.

"It doesn't matter if the request is supported by Sunni and Kurdish factions or not, it changes nothing. We have enough strength in the parliament," legislator Mowaffak Rubaie said.

© AP Photo
Iraqi Army, Militia Liberate Downtown Baiji City From ISIL Militants
Rubaie is also a former national security adviser in Nouri al-Maliki's government. Iraq has spent over $20 billion on US military training since the 2003 US invasion which toppled Saddam Hussein. The new army has been unable to counter ISIL and has a dire lack of heavy equipment, such as artillery and helicopters.

Iraq has recently purchased TOS-1 multiple rocket launcher systems and Mi-28 helicopter gunships from Russia to strengthen its army in the fight against the notorious terrorist group. At the same time, US airstrikes in the country have failed to help the Iraqi government mount an offensive against ISIL.

The United States' top-ranking general Joseph Dunford visited Iraq on Tuesday to seek assurances that Iraq would not request Russian aid in its operation against ISIL.

A week prior to Dunford's visit, the US State Department envoy for the US-led anti-ISIL coalition also visited Iraq, telling Iraqi Prime Minister that the US is "disturbed" by Russian-Iraqi cooperation, according to leaks reported in regional media.

Aside from the parliamentary factions, Iraq's Shiite militias have also pressured Prime Minister Haider al-Abadi's government to request Russian airstrikes, according to Reuters. However, Abadi appears to remain committed to maintaining Iraq's alliance with the US.

"Abadi told the meeting parties that it wasn't the right time to include the Russians in the fight because that would only complicate the situation with the Americans and could have undesired consequences even on long-term future relations with America," a senior Iraqi politician closer to al-Abadi told Reuters.

Iraq's powerful Badr Brigade militia has also demanded Russian airstrikes, saying that they have been decisive in Syria, unlike the US airstrikes in Iraq.

"I am positive that the government will respond to pressures, especially after the official mandate of the National Alliance for prime minister Abadi to request Russia's participation," a senior aide to the Badr Brigade's leader told Reuters.