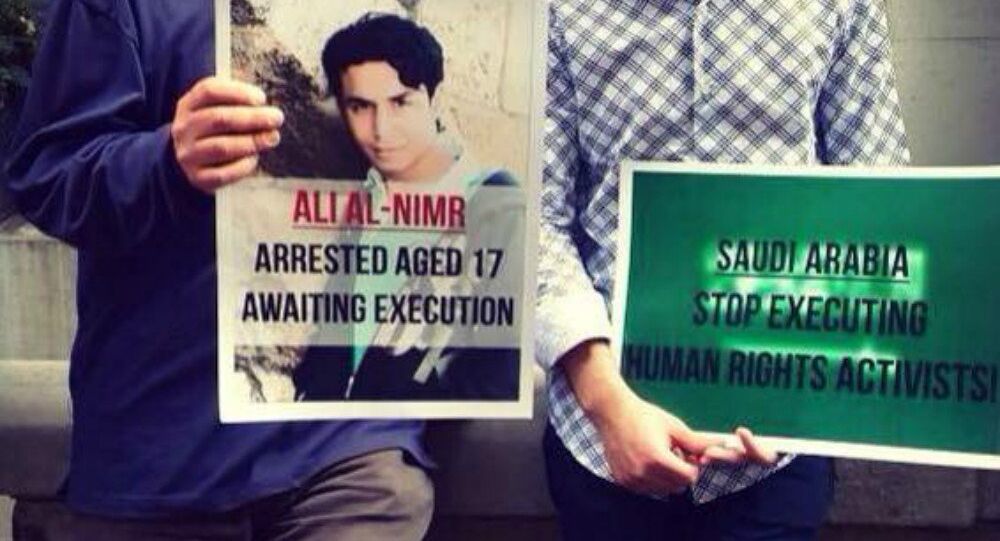 A juvenile prisoner is reportedly facing "death by crucifixion" in Saudi Arabia after his final appeal has been dismissed by the court.

In 2012, he was arrested at the age of 17 following a police clampdown on anti-government protests in the Shiite province of Qatif.

He was accused of taking part in illegal protests and illegally possessing firearms, even though no evidence has been provided to confirm the latter charge. In 2014, he was sentenced to death by crucifixion, Saudi Arabia's harshest penalty during which the decapitated body is publicly displayed.

Speculation is rife that the case against Ali may be based on his connection to Sheikh Nimr al-Nimr, who is his uncle and a prominent religious leader and critic of the Saudi regime.

Rights activists said that the younger al-Nimr was tortured, denied access to lawyers, and forced to sign a confession under duress.

© REUTERS / Khaled Abdullah
US Arms Sales to Saudi Arabia Contributing to Conflict in Yemen
It was reported that his trial did not meet international standards, and his appeal was held in secret without al-Nimr knowing about it.

Commenting on his sentence, Maya Foa, director of the death penalty team at legal charity Reprieve said "no one should have to go through the ordeal Ali has suffered — torture, forced 'confession', and an unfair, secret trial process."

"His execution — based apparently on the authorities' dislike for his uncle, and his involvement in anti-government protests —would violate international law and the most basic standards of decency. It must be stopped," Foa added.

Saudi Arabia has one of the world's highest execution rates, and only China and Iran carry out more judicial killings, according to Amnesty International.

© Flickr / Stephen Downes
Saudi Arabia Cutting Billions From the Budget as Oil Prices Tumble
With the 79th execution of this year conducted on May 6, Saudi Arabia is close to surpassing its total of 87 executions in 2014.  The Saudi government claims that all cases are tried in line with Sharia law, and that fair trial standards are strictly observed.

Meanwhile, a Facebook page has been created to voice protest at the death sentence on Ali Mohammed al-Nimr, whose family vehemently denies all the charges against him.

Saudi Arabia to Cooperate With Russia on Syrian Conflict, Refugees