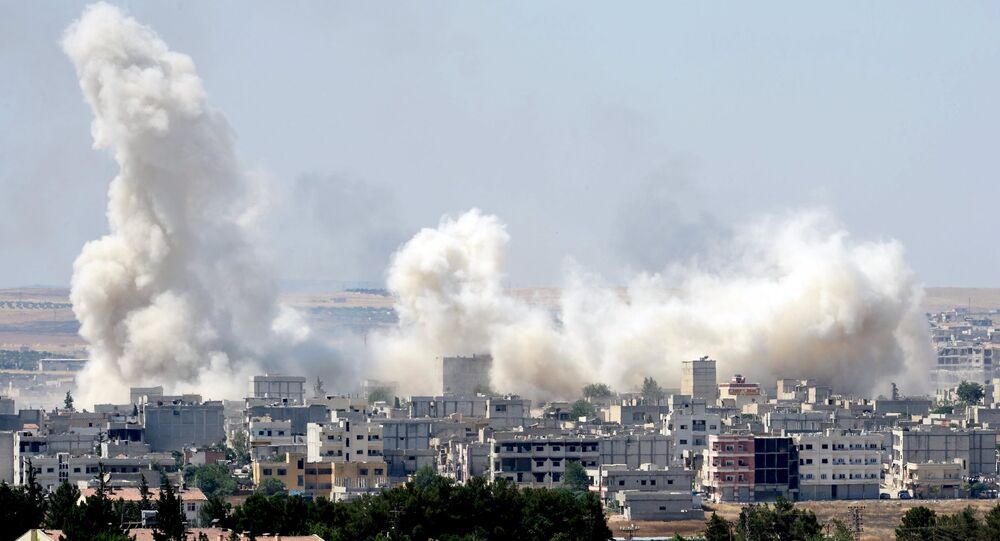 The Syrian government considers actions of the US-led coalition in Syria and Iraq to have nothing to do with the fight against terrorism, Syrian Prime Minister Wael Nader Halqi said.

DAMASCUS (Sputnik) – The actions of the US-led international coalition in Syria are ‘unproductive’ in the fight against terrorism because they are not coordinated with the Syrian leadership and violate international laws, Syrian Prime Minister Wael Nader Halqi told Sputnik.

“Syria does not consider US actions in Syria and Iraq productive. The US air missions in Syrian air space are not coordinated with the Syrian side and completely deviate from the framework of the fight against terrorism,” Halqi said.

“The Syrian army is fighting on the front and plays the decisive role, while the actions of the coalition led by the United States have nothing to do with the fight against terrorism,” the prime minster added.

According to Halqi, Syria is in great need for the suspension of the terror groups’ funding, cessation of militants’ transfers to the country, which are supported, in particular, by such countries as Turkey, Israel, Jordan, Qatar and Saudi Arabia.

"At present, the Syrian government does not feel real cooperation in these areas [suspension of funding, military and logistical support]. However, it is evident that Washington is interested in the counter-terror efforts only for its own purposes that consist of dividing the region, local communities and suppressing opposing forces," Halqi outlined.

Turkish and Saudi actions show that the countries are not prepared to create a coalition with Syria for a joint fight against terrorism,he added.

“We are grateful for the Russian president’s support, but the problem is that today we don’t see that Turkey or Saudi Arabia is prepared to change their stance and begin a common fight against terrorism. In reality we see that Saudi Arabia, Jordan, Turkey, and Israel continue to help armed groups that are active in Syria. So how can we say now that these countries will form a joint union with Syria in the fight against terrorism?” Halqi said.

© Sputnik / Andrey Stenin
Israeli Defense Minister Compares Syria to Smashed Egg Turned Into Omelet
Halqi added that he supports Russian President Vladimir Putin’s initiative to create a coalition between Syria and its neighbors in the fight against terrorism “if it satisfies the interests of all the countries in the region.”

Syria has been consumed by a civil war since 2011. The country’s government is fighting a number of opposition forces as well as radical Islamist militant organizations, including the IS jihadist group.

In late June, Putin called on Syria and other countries in the Middle East, including Turkey, Jordan and Saudi Arabia, to establish an anti-terrorism coalition, if Damascus considers it to be appropriate. The Russian president added that Moscow is ready to support the creation of such a coalition and to help establish dialogue between the countries in the region.