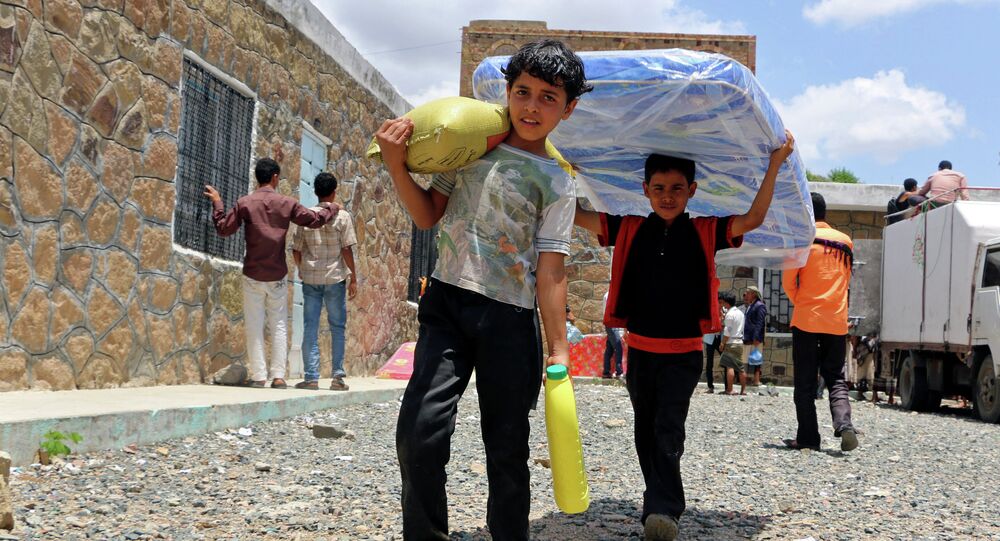 Months after the Saudi government pledged to single-handedly meet the United Nations’ (UN) “flash appeal” for humanitarian aid to Yemen, Riyadh is making it clear that the donation doesn’t come without strings attached.

© REUTERS / Stringer
At Least 10 Civilians Killed in Saudi-Led Coalition Airstrikes in Yemen
On April 12, as the Saudi-led air campaign rained bombs over Yemen, the UN issued an emergency flash appeal calling for $274 million in aid for the country to address the increasingly dire humanitarian condition. Less than 24 hours later, the call was met entirely by the very government that was leading the attacks against Yemen.

Overseen by the UN Office for Coordination of Human Affairs (UNOCHA), emergency funds are meant to be distributed quickly to where they are most needed. Over two months have passed since Riyadh pledged the full $274 million, however, and the money has yet to be delivered to Yemen.

A UN memo obtained exclusively by VICE news has revealed the reason for this delay is the restrictive conditions the Saudi government has placed on the aid disbursement. What’s more, the UN appears to have consented to these conditions.

On Tuesday, Riyadh announced that $244 million of the total amount pledged will be split between nine UN agencies. The next day, the UN’s undersecretary for humanitarian affairs and emergency relief coordinator Stephen O’Brien sent a letter to the Interagency Standing Committee, a global humanitarian coordinating body for humanitarian agencies.

In the letter, O’Brien explained that the funds would go through the King Salman Center for Relief and Humanitarian Work (KSC). He also noted that KSC would dictate the terms of the fund distribution with each of the nine agencies.

"The KSC would like to negotiate the Memorandums of Understanding (MoUs) with each recipient agency," he wrote. "They would also like to be assured that the Government of Yemen in exile is consulted."

The memo indicates that the pledge was a calculated move on the part of the Saudi government to monopolize the aid and control where it goes and when. According to VICE, the letter alarmed many aid workers who say that it was too vaguely worded, thereby giving Riyadh leeway for further delays.

"It’s really unusual for a single donor to have any substantive role once they contribute funds, let alone negotiate individual MoUs with agencies," an anonymous official involved in the Yemen response told VICE.

He also noted the UN’s acquiesce to Riyadh’s stipulations.

The letter comes as the UNOCHA struggles with massive funding deficits in over two dozen countries, including in Yemen where the agency estimates that 80% of the population needs humanitarian aid, and may explain the UN’s agreement to the Saudi government’s stipulations.

"With regard to NGOs, I am aware that there are sensitivities in receiving funding directly from the KSC," O’Brien wrote, acknowledging the unusual Saudi stipulations. "We therefore must work actively to mobilize additional funds to be allocated directly, or via the Pooled Fund, to our front-line partners."

However, another aid worker with an organization that delivers humanitarian supplies to Yemen told VICE that O’Brien’s acknowledgement does not take away from the UN’s concession to Saudi over control of the fund disbursement.

"The thing about this communication that we all got, it’s really vague," he said. "We are trying to assume and guess what they mean by this plan, but it’s not clear. The Saudis might very well sit on it for a long time."

While it is not unusual for donor countries to have a degree of control over the distribution of funds, InterAction humanitarian vice president Joel Charny notes that emergency situations require agencies like the UN to make the final call.

"It’s not that donors don’t care where the money goes, but there’s a sense that in an urgent case like Yemen you let the professionals make the call," he said.

O’Brien also told VICE a day before the letter was released that, as a general rule, the UN does not "condone any modality based on geography," meaning that donors cannot restrict aid distribution from certain areas.

Yet Riyadh has already asked for the restriction of aid distribution to Houthi-held areas in Yemen.

Saudi Arabia launched its air campaign against Houthi rebels in Yemen in March in an effort to reinstate Yemeni President Abdu Rabbu Mansour Hadi. Since the beginning of the airstrike campaign, over 2,800 people have been killed in the fighting and 13,000 have been wounded, according to local hospitals.