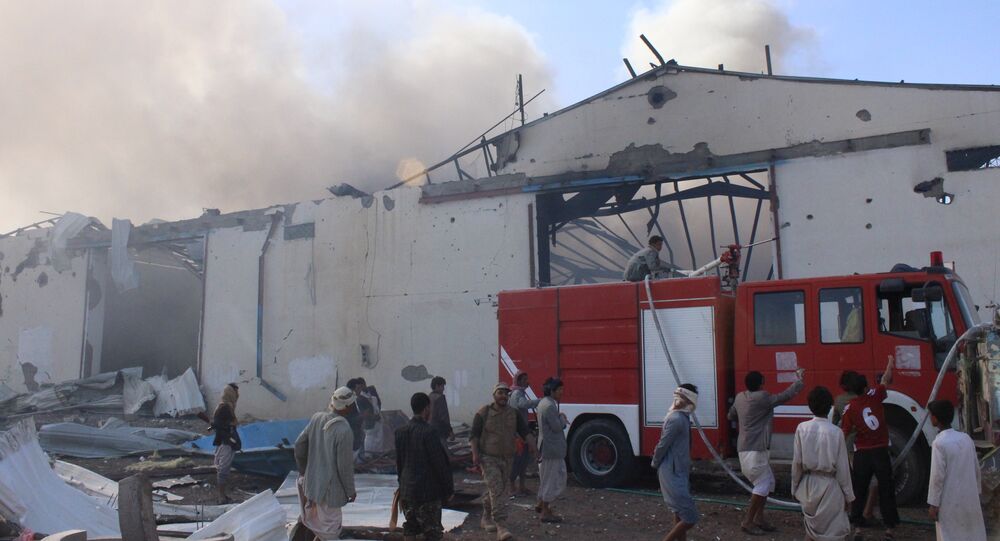 Grace Ommer, Oxfam's country director in Yemen, called on the warring sides of Yemen's conflict to establish peace and allow for humanitarian access.

© AFP 2021 / MOHAMMED HUWAIS
Iran Summons Saudi Envoy After Coalition Attack in Sanaa
MOSCOW (Sputnik) — Oxfam strongly condemned Monday the bombing of one of its warehouses in Saada Governorate in the north of Yemen.

"This is an absolute outrage particularly when one considers that we have shared detailed information with the Coalition on the locations of our offices and storage facilities," Grace Ommer, Oxfam's country director in Yemen, was quoted as saying by the organization on its website.

Thankfully no one killed in this airstrike on our humanitarian aid supply warehouse in #Yemen http://t.co/dKGSSUUOYX pic.twitter.com/Z1Mwu1U8OL

She pointed out that the contents of the destroyed storage facility had no military value and contained only humanitarian supplies. According to Ommer, no one was killed in the airstrike.

Ommer said all parties of the conflict in Yemen were adding to the already dire humanitarian situation in the country. She called on the warring sides to establish peace and allow for humanitarian access.

© REUTERS / Khaled Abdullah
New Saudi-Led Airstrike Kills At Least 26 Civilians in Yemen
Oxfam said it had been working for several years in Saada, developing water networks in an effort to deliver clean water to 70,000 people in the country's rural communities.

Yemen is currently in a military conflict between Houthi militants and troops loyal to President-in-exile Abd Rabbuh Mansur Hadi. To stop the advance of the Houthis, Hadi asked Saudi Arabia for military assistance. A coalition of countries, led by Saudi Arabia, has been firing air-to-ground missiles at Houthi positions in heavily populated cities in the country.

Many countries have been evacuating people from Yemen amid escalating warfare.