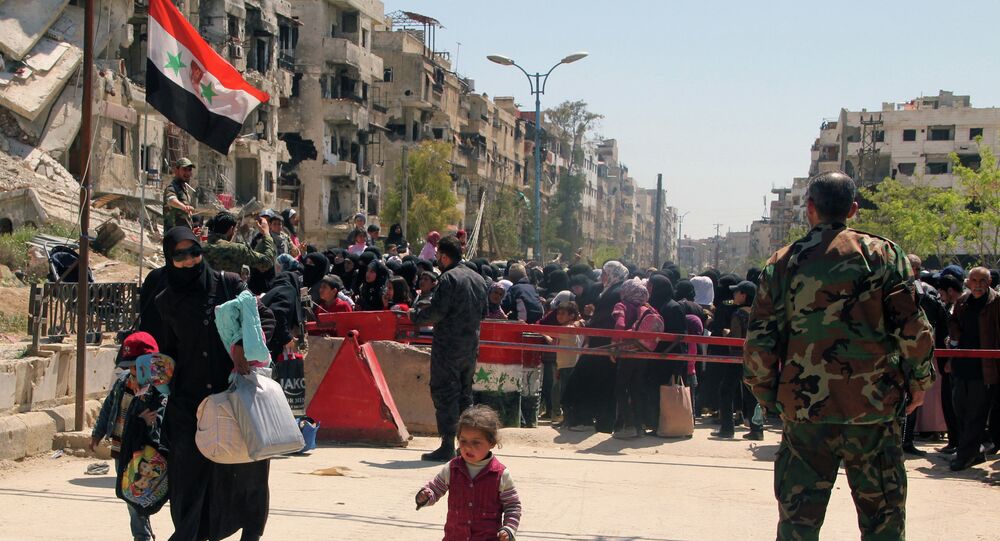 A spokesman for the Central Committee of the Popular Front for the Liberation of Palestine said that Palestinian military units have liberated almost half of the Yarmouk refugee camp territory from ISIL militants.

BEIRUT (Sputnik) — Palestinian military units have liberated almost half of the Yarmouk refugee camp territory, outside the Syrian capital of Damascus, from ISIL militants, a spokesman for the Central Committee of the Popular Front for the Liberation of Palestine (PFLP) said.

"Around 45 percent of the territory has been freed; we are approaching the half of it. The [ISIL] militants are retreating under the pressure of the Palestinian resistance," Rafei Saadi told RIA Novosti on Thursday.

© REUTERS / Thaier Al-Sudani
ISIL- Infested Yarmouk Camp Palestinian ‘Responsibility’ –Palestinian Party
Saadi added that around 12,000 civilians were still trapped at Yarmouk as the military had failed to secure a safe corridor for the delivery of humanitarian aid to the camp amid ongoing battles.

Last week, a group of 14 Palestinian factions said they supported a joint military operation with the Syrian army to combat the ISIL at Yarmouk.

ISIL militants had seized up to 95 percent of the camp's territory earlier this month.