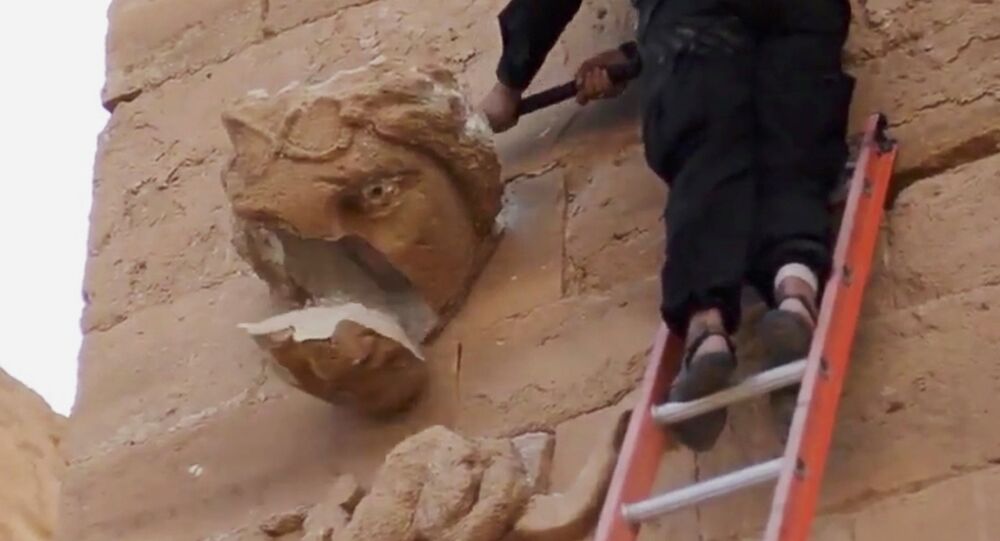 Where Is The 'Islamic State'?
The video, released Friday, features a militant on a ladder smashing a carved sculpture of a face on the side of a wall. The video then shows a militant using a pick-axe to chop at the feet of a statute, and a militant firing an automatic rifle at carved facial sculptures on city walls.

One of the militants, speaking Arabic with a Gulf accent, declared that the ancient site is being destroyed for being "worshipped instead of God."
Kurdish fighters opposed to ISIL reported last month that radical Islamist militants had begun the destruction of the 2,000-year-old UNESCO World Heritage site. Militants were initially reported to have hacked away at the city's priceless legacy with shovels, and to have taken away the city's collection of ancient gold and silver currencies.

Still under ISIL occupation, it remains unclear just how much damage the ancient city has sustained, although observers fear the worst.

Pictures from the ancient city of #Hatra that was bulldozed by #ISIS earlier today pic.twitter.com/gB83HFPQ1v

Hatra, lying about 100 kilometers southwest of ISIL-controlled Mosul, was once considered by UNESCO to have offered "exceptional testimony to an entire facet of Assyro-Babylonian civilization."

ISIL, controlling vast swathes of Iraq and Syria, has outraged the world community with its spree of destruction of the ancient historical treasures under its control. UNESCO Director General Irina Bokova said the militant group's destructive campaign could be compared to a war crime, noting that ISIL's actions amount to "cultural cleansing."

UNESCO Director-General condemns the destruction of Nimrud, an attack against the Iraqi people http://t.co/qMiew7AZpy pic.twitter.com/di78Alfl50

Last month, the Iraqi government reported that ISIL fighters had attacked the 3,300-year-old Assyrian city of Nimrud, razing it to the ground with the help of trucks. ISIL militants themselves also posted a video featuring the destruction of a collection of antique statues and sculptures at the Mosul Museum.

Built in the 3rd or 2nd century B.C., Hatra had served as a religious and trading center for the Parthian Empire, before becoming the capital of the first Arab Kingdom, known as Kingdom of Araba.

Rule of Law: ISIL Imposes Sanctions on Smoking and Listening to Music