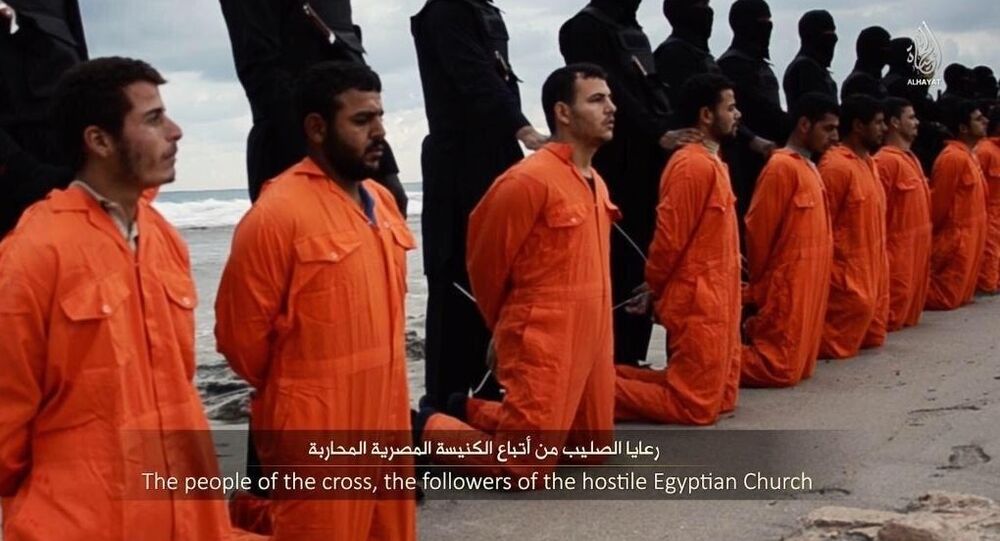 Copt Killers: ISIL Tweets Video in Which 21 Egyptians are Beheaded in Libya

The Islamic State has released a video purporting to show the execution of 21 Egyptians.

ISIL insurgents released a video Sunday purporting to show the execution of 21 Egyptian Christians by the militants.

The footage was posted Sunday on Twitter feed of a website that supports ISIL, picturing the captives dressed in orange suits. In the video militants marched the captives to a beach, forced them onto their knees and then beheaded them.

© REUTERS / Amr Abdallah Dalsh
Egypt’s President Bars Egyptians From Visiting Libya Following ISIL Execution
The group said in the video that the execution was revenge for "Muslim women persecuted by Coptic crusaders in Egypt". The caption under the video read: "The people of the cross, followers of the hostile Egyptian church."

Media reports emerged earlier on Sunday, claiming that a group of fishermen was abducted by the armed militants. The authorities of the syndicate in Kafr El-Sheikh, where the fishermen worked, urged the Egyptian government to take immediate action for the early return of their employees, according to Sky News Arabia.

In late December 2014, the gunmen in the Libyan city of Sirte captured a group of Egyptian workers, also Coptic Christians. It was later found that they were executed by Islamic State.

© REUTERS / Philippe Wojazer
Cairo Reserves Right to Avenge ISIL Execution of 21 Egyptians - President
ISIL is a jihadist group that seized substantial parts of Iraq and Syria in 2014, proclaiming an Islamic caliphate in the areas under its control.

On Friday, the militants linked to the Islamic State seized a radio station in the city of Sirte, which is located 500 kilometres (310 miles) east of the Libyan capital Tripoli.