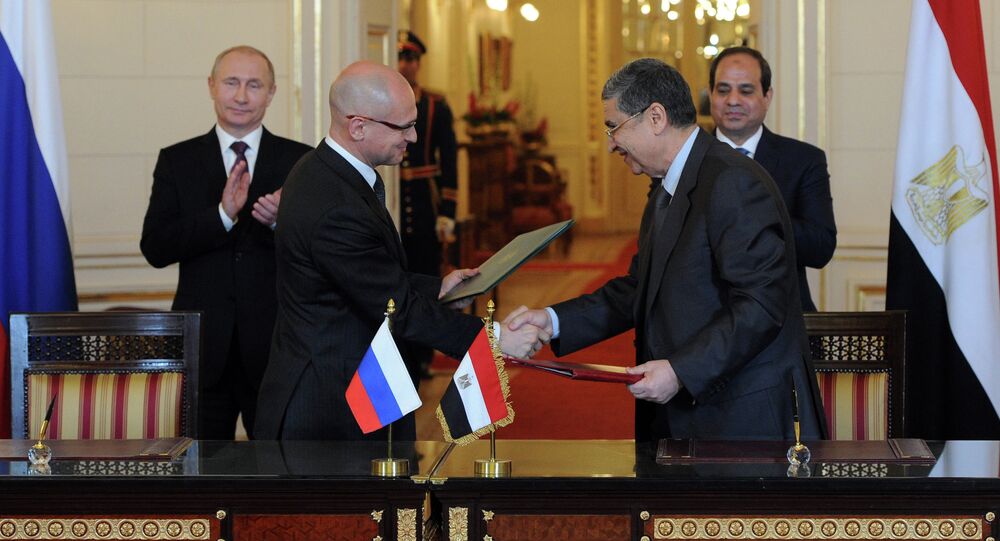 Head of Rosatom nuclear energy corporation Sergey Kirienko said that Rosatom is in talks about building a Russian technology-based nuclear power plant out of four 1200-MW units each in Egypt.

"We are talking about building a Russian technology-based nuclear power plant out of four 1200-MW units [each]," Kirienko said.

The head of Rosatom added that the new-generation plant is expected to be built with enhanced "post-Fukushima" safety standards.

Kirienko said Russia is ready to provide a loan to assist Egypt in the construction of its first nuclear power plant.

"This comprehensive cooperation is expected to provide financial support in the form of an interstate credit," Kirienko said, adding Russia was also willing to supply fuel to the NPP, draft its framework and train specialists.

© Sputnik / Sergei Pyatakov
Egypt May Use Russian Nuclear Plant as Basis for Its Atomic Infrastructure
Egypt plans to build a nuclear power plant in the Dabaa coastal area, in the country's northwest. The heat from the nuclear energy plant will also be used to distill large amounts of sea water, Kirienko said.

Earlier in the day, Russia's Kirienko and Egyptian Energy Minister Mohamed Shaker signed a project development agreement for the construction of a nuclear power plant, in a bid to expand nuclear energy cooperation between the two countries.

The deal was signed on the heels of talks held between Russian President Vladimir Putin and Egyptian President Abdel Fattah Sisi, who expressed hope that Russia would help construct the country's first nuclear facility.