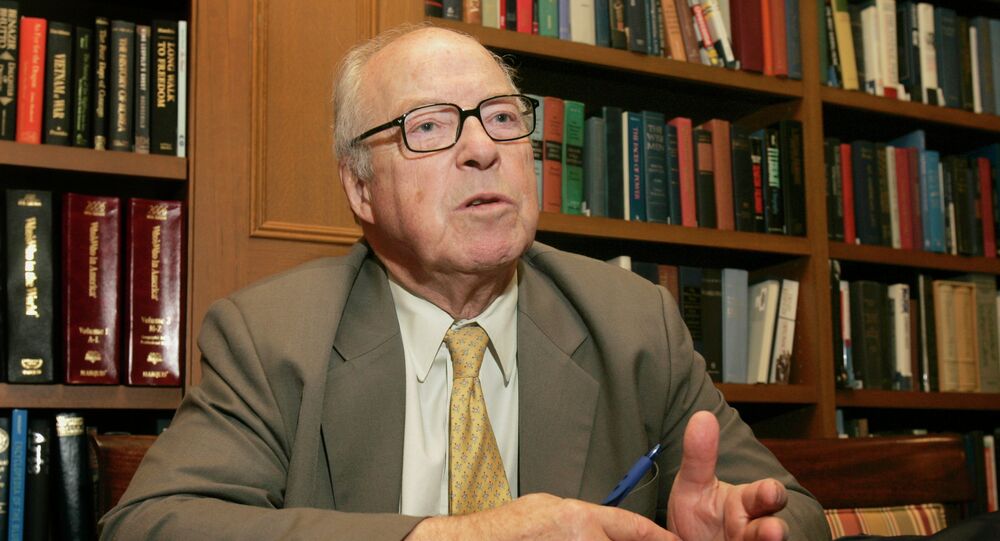 Swedish diplomat and former head of the International Atomic Energy Agency (IAEA) Hans Blix considers the elimination of Syria's chemical weapons and Iranian nuclear program as issues that could improve Russian relations with the rest of the world.

MOSCOW, November 21 (Sputnik) — Relations between the world's major powers have deteriorated and it is important to move the focus on to the issues on which there is agreement, such as the elimination of Syria's chemical weapons or Iran's nuclear program, Swedish diplomat and former head of the International Atomic Energy Agency (IAEA) Hans Blix told Sputnik News Agency on Friday.

"The relations between the big powers, especially between Russia and the others are so bad at the moment that we should take care of the matters in which there is agreement. Syrian chemical weapons is one case and I think Iran is another case," Blix said.

"We need a little success story regarding cooperation between Russia and the rest of the world," he added.

"I think the Russian attachment to non-proliferation is right. We have nine nuclear weapon states in the world and that is enough. That is more than enough. So this is an interesting thing Russia has in common with the United States," Blix said.

Addressing recent statements by coordinator of the Organization for the Prohibition of Chemical Weapons and the United Nations (OPCW-UN) Joint Mission in Syria Sigrid Kaag that the Syrian regime had failed to declare four chemical weapons facilities, Blix stated that "Syria has done away and helped to do away with a vast amount of chemical weapons and that is a fundamental thing. If they have failed to declare something that still existed, well, that weakens the confidence one has in them".

In August 2013, an unprecedented chemical attack in Eastern Ghouta, a suburb of the Syrian capital Damascus, killed almost 1500 civilians. Militants and the Syrian government blamed each other for the attack.

Following a breakthrough deal, brokered by Russian Foreign Minister Sergei Lavrov and US Secretary of State John Kerry, Syria agreed to place its chemical weapons under international control for further elimination. Damascus subsequently joined the Chemical Weapons Convention and handed over documents on its arsenal to the OPCW.

In late October, the OPCW announced that a total of 97.8 percent of chemicals removed from Syria earlier this year had been destroyed.