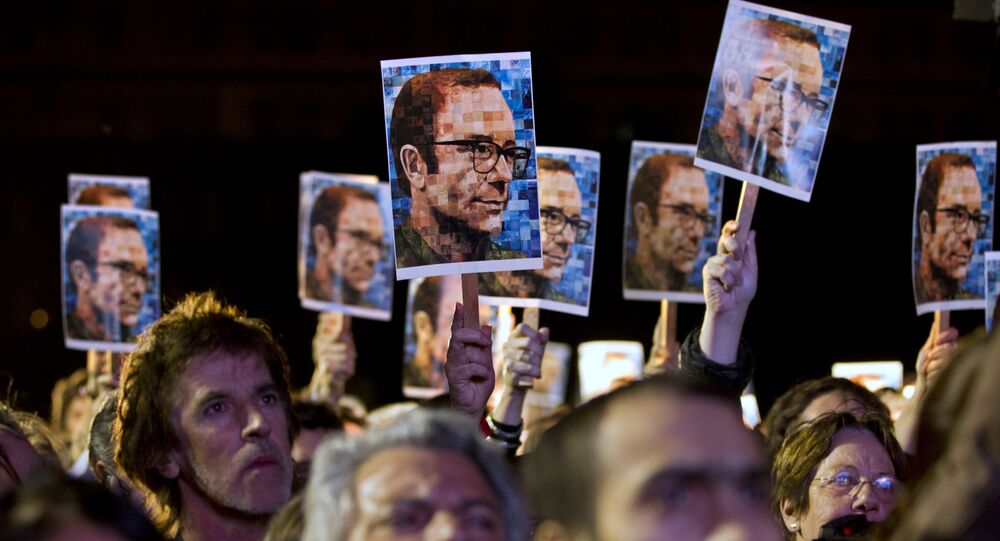 Between 1976 and 1983 up to 30,000 left-wing activists and intellectuals were secretly abducted by the military junta and held in torture centres in Argentina, before being killed. Among the most famous of them was Rodolfo Walsh, the father of investigative journalism in Latin America.

A former naval officer implicated in dozens of crimes under the military junta in Argentina has been arrested in Brazil.

The Argentinian foreign ministry said on Wednesday, 13 May, they would seek the extradition of Gonzalo "Chispa" Sanchez, 69, who is suspected of involvement in the disappearance of journalist Rodolfo Walsh and a young Swedish woman, Dagmar Hagelin.

[Tweet: 'He was captured in Brazil for the ESMA genocide Gonzalo "Chispa" Sánchez, one of those accused by the operative of the victim #RodolfoWalsh.']

Walsh, a famous crime novelist and journalist, disappeared the day after he sent an open letter to the military junta, denouncing their human rights abuses in Argentina.

Over the next seven years they abducted and tortured thousands of left-wingers, many of whom were taken to the notorious ESMA (Naval Mechanics School) in Buenos Aires. Many were then taken out to sea and thrown out of helicopters or planes, their bodies never to be found.

The human rights abuses only ended with the restoration of democracy in 1983, following defeat by Britain in the conflict over the Falkland Islands, known as the Malvinas in Argentina.

A foreign ministry statement said: "The ministry of foreign affairs notified our embassy in Brasilia that it considers Gonzalo Sanchez a fugitive in judicial investigations into crimes committed within the scope of ESMA.”

Gonzalo Sánchez, who was arrested in Rio de Janeiro last week, is wanted for a raft of crimes committed during the 1976-1983 military dictatorship, including the murders of Rodolfo Walsh and Dagmar Hagelin.https://t.co/f2Gj3IbS71

​In 2017 Sputnik interviewed the chief prosecutor in the ESMA trials, Abel Cordoba, who said: “The mechanism of death ensured there were no witnesses. It was often claimed to be an act of God. Some pilots said some people fell like 'ants’.”

Sanchez was located in Brazil several years ago but an attempt to extradite him in 2017 failed.

Ironically Brazil’s President, Jairo Bolsonaro, is a former officer in the Brazilian military regime which ruled the country between 1964 and 1985 and committed its own human rights abuses.

Bolsonaro has in the past even praised those who tortured victims such as former President Dilma Rousseff.

Brazil and Argentina were both members of Operation Condor, a CIA-backed project to crack down on alleged communists in Latin America during the 1970s.

The Hijos e Hijas (The Sons and Daughters for Identity and Justice Against the Forgotten and Silence) pressure group in Buenos Aires said it was surprised by "hopeful" after hearing Sanchez had been detained.

Analía Ivón De Pino and David Ariza, from Hijos, said: "We believe it is a great step forward for justice to extradite this criminal that enjoyed freedom for over 40 years and remained at large, despite being charged with crimes committed against humanity."

Every year Hijos leads a walk to Walsh's home in San Vicente on 25 March to remember his life and demand its appropriation by the state.

Mr Ariza said: "Relatives of the police officers involved in raiding the home and that occupied it to destroy it live in it. They took the belongings of the writer and his family, including some of his works."

"Every year we will continue to fight to keep memory, truth and justice alive in our country," he added.