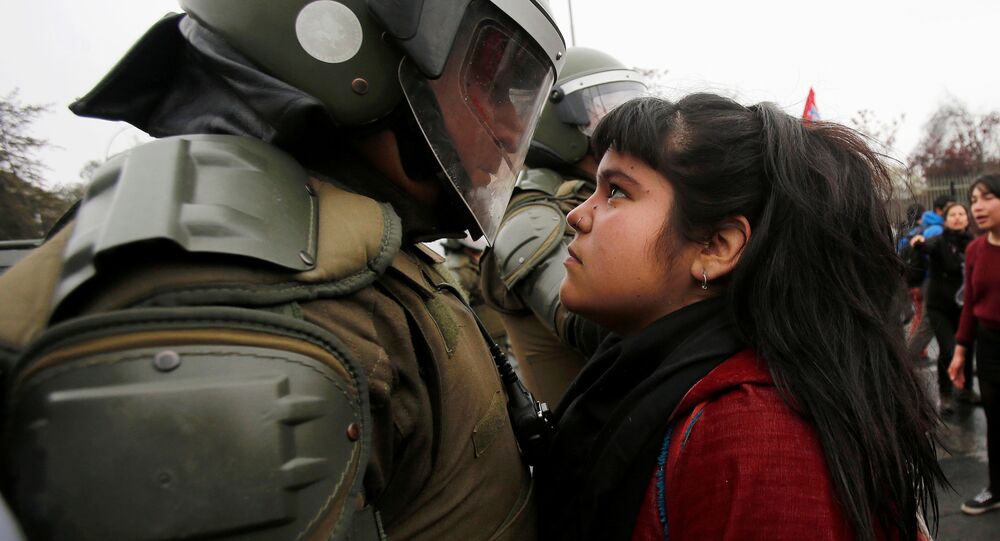 Coronavirus Chile: Pinochet-Era Rights Abusers Could be Freed From Jail

The proposal has been strongly criticised by Chilean rights groups, including the Association for the Families of Disappeared Detainees.

Former Chilean military agents convicted of serious human rights violations under the rule of Augusto Pinochet (1973 - 1990) could be freed from prison due to a ruling aimed at halting the spread of coronavirus among the country’s prison population.

An urgent bill proposed by the Justice Ministry would release 1,300 prisoners, categorised as ‘low-risk’ - including the elderly, pregnant and terminally ill - from overcrowded jails, allowing them to serve out their sentences under house arrest, as long as they have already served at least half of their sentences.

Some government senators have argued the ruling should also apply to Punta Peuco inmates – a facility housing around 70 inmates convicted of human rights violations under Pinochet’s 17-year-long iron rule. Punta Peuco is known as a luxury prison, with spacious, private cells, equipped with private bathrooms and satellite TV, where inmates can freely and easily use computers, tennis courts and even barbecue areas.

Manuel Contreras, leader of Pinochet’s feared Dina secret police 1973 - 1977, was serving in excess of a 500-year prison sentence for his role in assassinating and ‘disappearing’ opponents of Pinochet’s government, including priests, journalists and political activists, when he died there in 2015.

“Faced by a global pandemic costing thousands of lives, our government is making an unethical and opportunistic attempt to free convicted human rights criminals. Although our organisation is in favour of releasing prisoners who meet these conditions serving sentences for lesser crimes, this is an unthinkable concession in this political climate,” said Lorena Pizarro, spokesperson for the Association for the Families of Disappeared Detainees

Pinochet came to power by in a US-backed coup, in the process overthrowing popular leftist leader Salvador Allende, who’d nationalised various Chilean industries, including the country's copper sector. Declassified British Foreign Office files from the period reveal these measures resulted in many people "in the poorer and most depressed sections" of Chile "[attaining] a new status and [tasting] a better standard of living”.

This state of affairs simply wouldn’t do for Washington - “I don’t see why we need to stand by and watch a country go communist because of the irresponsibility of its own people,” then-US National Security Advisor Henry Kissinger chillingly remarked - and a plan of action was duly hatched to install Pinochet, which succeeded 11th September 1973.

That same day, Allende committed suicide in the Presidential Palace, just as it was stormed by Pinochet’s military units. British-made fighter jets proved instrumental in its capture.

"Hawker Hunters put on an impressive show of force [diving] down at the Palace and with remarkable accuracy released their aerial rockets. These did much damage and set the Palace on fire. The President's residence on the outskirts of the city, where resistance was encountered, was similarly attacked," a British diplomat boasted at the time.

© AFP 2020 / STEPHAN JANSEN
German Government Refuses to Disclose Info on Cooperation with Pinochet
After giving a farewell speech to Chileans on live radio, during which he spoke of his love for Chile and faith in its future, and gunfire and explosions could be heard audible in the background, he shot himself with an AK-47. The weapon was purportedly given to him as a gift by Cuban leader Fidel Castro, and it bore a golden plate engraved: "To my good friend Salvador from Fidel, who by different means tries to achieve the same goals".

In 1991, Chile’s National Truth and Reconciliation Commission issued its final report on the state of human rights in Chile under Pinochet, which detailed 3,428 cases of forced disappearance, killing, torture and kidnapping. The whereabouts of many of individuals who were “disappeared” remain unknown, and many perpetrators have refused to reveal how bodies were disposed of.

Trump Says He Will Decide When to Lift Coronavirus Lockdowns, Not State Governors