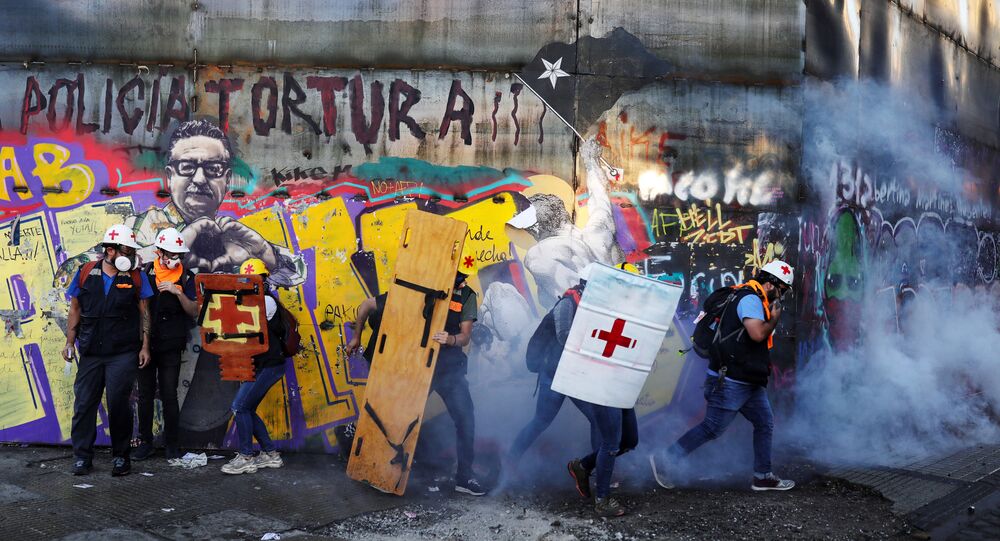 Chile’s president formally set in motion the process of redrafting the country’s constitution on Monday. However, the two-month-long protests continue as Santiago remains intransigent on more meaningful social reforms. A new UN report has also blasted Chile’s police for their persistent, violent tactics that left new victims over the weekend.

A ‘Dry Agreement’ on Constitutional Reform

Chilean President Sebastian Piñera signed the law authorizing the referendum Monday afternoon that lawmakers passed last week. However, the National Congress’ decision not to require gender parity among delegates to the constituent assembly or to reserve seats for the country’s indigenous peoples, who are roughly 10% of the population but have long been excluded from the country’s administration, has protesters doubling down on their resistance.

The April 26, 2020, vote will determine whether Chileans want a new constitution and, if so, whether the constituent assembly that draws up the new magna carta would be composed purely of elected delegates or a mix of elected delegates and officeholding lawmakers from the country’s legislature.

Sputnik previously reported on how the November agreement that led to Monday’s law left a bitter taste in the mouths of many protesters, causing resignations from parties that signed the agreement as critics blasted lawmakers for arriving at the decision without input from the millions of Chileans protesting in the streets.

The present constitution dates to 1980, when it was used by military dictator Augusto Pinochet to enshrine the neoliberal order brought about by his 1973 coup d’etat, which was supported by the CIA and which overthrew the democratically-elected socialist President Salvador Allende. Pinochet left office in 1990 following huge protests, but the system has changed little in the 30 years since.

A December 19 declaration by the Department of Human Rights at the University of Chile in Santiago laid out their demands for a constitution with a focus on human rights and the inclusion of women, LGBTI people, indigenous people and other minorities.

​The Communist Party of Chile, which holds sway among the protesting social movements and labor unions, has said it will not participate in the constitutional process without those diversity guaranteeing measures.

CPC chief Guillermo Teillier said the issue is not yet set in stone, referring to the bill signed by Piñera Monday as a “dry agreement” that could still be tweaked before June 2020.

“We will be in the convention, we will apply and we will fight for the contents of the new Constitution,” Teillier said Monday, according to Prensa Latina, “and we will continue to insist that the convention adopts the characteristics of a Constituent Assembly, which is what the people ask for.”

Indeed, a poll released by Public Square Cadem on Monday showed that 92% of Chilean respondents believe the constitutional convention should have equal representation of men and women and 89% believe there should be special quotas for indigenous people, reflecting broad support across the political spectrum for forming a true constituent assembly.

According to Al Jazeera, polls show that roughly two-thirds of Chileans think the protests should continue and support an overhaul of the country’s pension, health care and education systems.

The systems date to the Pinochet era, which ushered in an era of mass privatizations and warfare against the country’s huge political left, with tens of thousands murdered, disappeared, and tortured by the regime.

Reuters noted Chile’s pension system “has been heralded as a model of privatization,” although at least one-third of elderly Chileans who receive payouts from the program must also continue to hold informal jobs long after their “retirement.”

The present agreement would see monthly minimum payouts by the pension system rise from $396 per month to $360 per month, but that’s still far short of the $657 per month for which union and protest leaders have called.

The protests began in mid-October amid a hike in transit fares, which proved the final straw in a country deeply divided by inequalities of wealth. Amid intransigence by Piñera, who declared a state of emergency and sent in the army to restore order, millions of Chileans occupied the central plazas in Santiago and dozens of other cities, pushing their demands beyond subway fares and toward more wide-sweeping social change.

One protester, a metallurgist who gave his name only as Martin, told Al Jazeera last week that the reforms agreed to by Piñera’s government during the last two months of protest are “like little aspirins.”

"Conditions are untenable," the metalworker said. "We need to transform the whole model."

Al Jazeera noted that protesters expect an uptick in protest activity in March, as the day of the April 26 referendum closes in.

"I think it is going to be difficult, but we are ready to continue to the very end," Alberto Mamquepan, an indigenous Mapuche dockworker in the northern city of Antofagasta, told Al Jazeera. "We can achieve something here.”

‘They Did it On Purpose’

A shocking incident of police violence was captured on tape on Friday in Santiago, when a protester was pinned between two armored vehicles, which continued their rampage through the crowd afterward.

In the graphic footage, 20-year-old Ignacio Pérez Cortéz was pinned between two armored police vehicles nicknamed “zorrillos,” or “skunks,” by protesters, shattering his pelvis in four places, giving him a split urethra as well as other injuries.

The notoriously violent police in
Chile's brutal right-wing Pinochet-style regime (which is of course strongly backed by the US) just crushed a protester in between two armored vehicles.

Warning, this video is terrifying:pic.twitter.com/9fuU6Ikgq1

​Perez’s sister, Valeria, tweeted later Friday that her brother’s condition was stable, but that the first thing he said was “they did it on purpose.”

On Saturday, Chilean prosecutors filed reckless injury charges against the driver of the zorrillo, Officer Mauricio Carrillo, Agence France-Presse reported. Outside the courtroom, Valeria Pérez told members of the press her family would not be satisfied simply with the driver being found guilty.

​"As a family we want it to be known, this is the guilt of the state, of the cops, of the intendant," she said, according to Piensa Prensa.

In a separate incident on Saturday, Chilean police were seen attacking two journalists from TeleSUR, Italo Retamal and Paola Dragnic, as they filmed the protests. The two journalists can be seen being hit, shoved, and pepper sprayed in the footage posted on Twitter.

The incidents come on the heels of the latest international human rights report blasting the Chilean Carabineros for their handling of the protests over the last two months. A 30-page report published on December 13 by the UN High Commission on Human Rights based on research during the first three weeks of November found that management of the protests by the police “was carried out in a fundamentally repressive manner,” according to Imma Guerras-Delagado, who led the UN mission to Chile.

“The police have regularly failed to distinguish between people demonstrating peacefully and violent protesters,” the report said, noting the vast majority of protesters were peaceful demonstrators.

The UN documented 113 specific cases of torture and ill-treatment of protesters by the army during the state of emergency as well as the police, as well as 24 cases of sexual violence against women, men and adolescents. It also notes more than 350 people with injuries to their eyes or faces, an “alarmingly high number,” the report notes.

UN Human Rights Commissioner Michelle Bachelet, who incidentally was also the President of Chile from 2006-2010 and from 2014-2018, said that Chile should be able to demonstrate it has followed UN-recommended reforms within the next three months, including the proper way to use tear gas and to end the indiscriminate use of anti-riot shotguns and other less-than-lethal weaponry by the police.

“This follow-up mechanism should aim to establish measures to prevent the recurrence of the sad and troubling events that have engulfed Chile over the past two months – especially as protests are continuing in different parts of the country, albeit with less intensity, and we continue to receive allegations of human rights violations,” Bachelet said.

However, like the report issued by Human Rights Watch (HRW) late last month on police violence in Chile, the recommended reforms offer little more than a slap on the wrist for the Carabineros, in most cases simply stating that harmful actions should be ended. Sputnik noted the sharp contrast between how HRW objected to Chilean police violence and how it objected to police violence in Venezuela and in Bolivia before Evo Morales was overthrown in a coup d’etat last month, which was consistently much stronger and condemnatory by comparison.