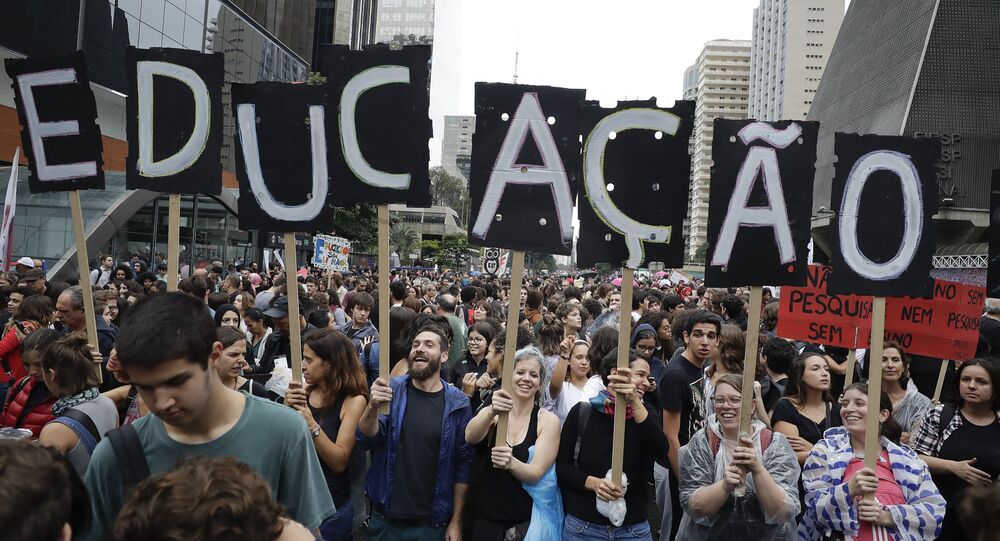 Tens of thousands of protesters gathered in cities across Brazil on Wednesday to rally against education spending freezes made by Jair Bolsonaro’s government as part of a wider government effort to reduce spending.

On Wednesday Brazil’s National Student Union called for protests against what it called spending cuts after the Education Ministry said it was freezing nearly a quarter of discretionary spending — $1.85 billion.

Marches took place in over 200 cities, according to a count by the Globo TV network, gathering reportedly 150,000 across the country. In the capital Brasilia, some 7,000 students and university professors marched to Congress, carrying signs against the cuts. One said: “Education is not an expense, it is an investment.” Another read: “Without investment, there is no knowledge.”

Sergipe may be the smallest state in Brazil, but thousands upon thousands of students & others march the streets against Bolsonaro’s budget cuts to universities. It’s one of the biggest protests I’ve seen in Aju over last 5 years. Quite impressive!@BrasilWire #TsunamiDaEducacao pic.twitter.com/XojWIOMSum

#Brazil: Tens thousands of students, teachers and their supporters march in #Recife in defense of the public education. #TsunamidaEducação #NaRuaPelaEducação #GreveNacionalDaEducacao pic.twitter.com/Wq9w464g1j

“Our message to Bolsonaro is that society will not accept these cuts of 30 percent,” said Luis Antonio Pasquetti, head of the National University of Brasilia’s teacher union.

The marches were mostly peaceful, however, in Rio de Janeiro a march turned violent when protesters allegedly set a bus on fire and started shooting fireworks at police officers who had to use tear gas bombs and rubber bullets to break a crowd up. There is still no information on the number of injuries during the protests.

Speaking in Dallas, Texas, where he travelled to attend a gala dinner, Bolsonaro dismissed the protests against cuts to education funding.

“They are useful idiots, imbeciles, who are being used as the manoeuvring mass of a clever little minority who make up the nucleus of many federal universities in Brazil,” he said.

Brazil’s Education Minister Abraham Weintraub blamed the situation on the legacy of the previous government while defending a shift away from spending on universities to favour elementary schools.

“The priority is preschool, elementary school and technical school,” he said. “A scientific, technical, number-based, efficient and managerial approach is vital to save this country from the economic stagnation of the last 20 years that we are living.”

Some Like It Hot: Sensual Outfits at Brazil Fashion Week