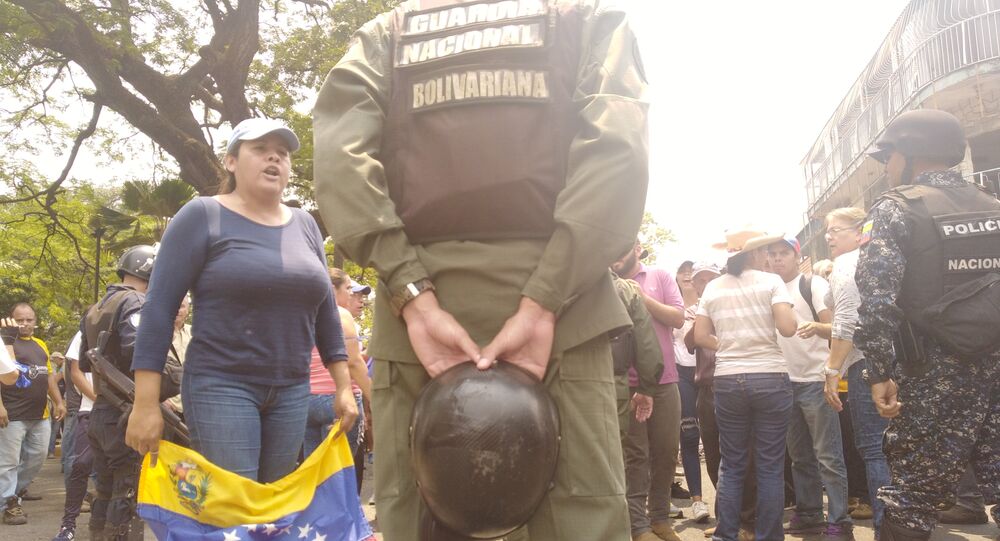 The Russian foreign minister has made several comments on the recent attempt to overthrow Venezuelan President Nicolas Maduro by the opposition during violent rallies on 30 April and 1 May.

"You are aware about our principled, consistent, and firm support for the legitimate government of Venezuela, headed by President Maduro. We now see an unprecedented campaign, led by the United States, to overthrow the legitimate authorities of Venezuela. We condemn this campaign for violating the principles of international law", Lavrov said.

Russia calls on the US to abstain from provocative moves directed at Venezuela and to act within the framework of international law, Foreign Minister Sergei Lavrov has said in a statement.

"We never meddle in the domestic affairs of other states, and we are urging all others to act precisely like this", Lavrov said ahead of talks with Venezuelan Foreign Minister Jorge Arreaza in Moscow.

Attempts at a forced change of power in Venezuela undermine the crisis settlement process and carry a risk of catastrophe, Lavrov stated.

"Attempts to forcibly change the government in Caracas, of course, have nothing to do with the democratic process, but only hamper the prospects for a political settlement of the crisis, and the continuation of this line is fraught with the most serious consequences", Lavrov said.

The minister went on to say that Moscow and Caracas are set to strengthen their strategic cooperation.

"Our regular contacts affirm the strong brotherly ties between our peoples and our leaders' intention to reinforce strategic partnership", Lavrov said.

The statement comes after a recent attempt to overthrow President Maduro carried out by the Venezuelan opposition on 30 April that left at least 300 people injured, according to a local human rights group.

Venezuela has been in a state of political crisis since January, when opposition leader Juan Guaido declared himself interim president, challenging the outcome of the country’s last presidential election. The move was promptly backed by the United States, which vowed to support Guaido and imposed a row of sanctions against the Latin American country, seizing billions of dollars' worth of the country's oil assets. Moreover, a number of senior US officials, including President Donald Trump, have repeatedly stated that all options remain on the table with regard to the Venezuelan crisis, including military action.