Earlier, Colombian President Ivan Duque announced that his country had handed over the humanitarian aid to the self-proclaimed interim Venezuelan President Juan Guaido, going on to demand a "peaceful" transfer of the aid to Venezuela.

Venezuelan opposition leader, who recently proclaimed himself an interim president, Juan Guaido announced that humanitarian aid is on its way to Venezuela. Reuters reported, citing the opposition lawmaker Miguel Pizarro, that trucks carrying the aid have crossed the Brazilian-Venezuelan border. However, a witness interviewed by the news agency claims that while the trucks are de-facto on Venezuelan territory, they haven't passed the border security point. 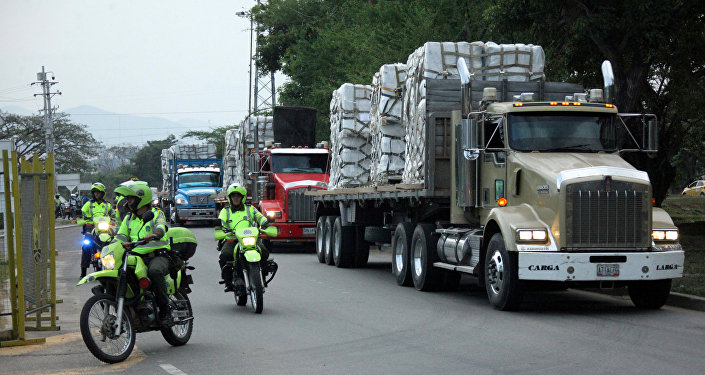 According to the AP, the trucks coming from Brazil are stuck at a Venezuelan border checkpoint, contradicting earlier statements by Guaido, who claimed that they had made it into the country.

Another humanitarian convoy is set to be unloaded at the Simon Bolivar Bridge and the aid will be passed across the Colombian border with Venezuela via a human chain, Reuters reported, citing Colombia's migration agency.

Guaido later announced on Twitter that the trucks carrying humanitarian relief from Columbia had already reached Venezuelan territory, but added that their progress was being impeded by Maduro's forces.

On 21 February, Venezuelan opposition leader Juan Guaido set off to the country's border with Colombia to welcome the arrival of the US humanitarian convoy. The relief aid was gathered at logistics hubs in Roraima in Brazil, Cucuta in Colombia, and on the Caribbean island of Curacao.

Venezuelan President Nicolas Maduro has denounced the humanitarian aid, calling it a pretext for a US invasion of the country, ordering the closure of the borders in a bid to stop the aid delivery.

Juan Guaido also claimed on 23 February that a number of high-ranking officials had revoked their support for Nicolas Maduro, with some of them having already fled to Turkey. The opposition leader also alleged that some of Caracas' soldiers have stopped recognising Maduro as president.

Situation on Venezuelan-Colombian Border Amid US Humanitarian Aid Delivery