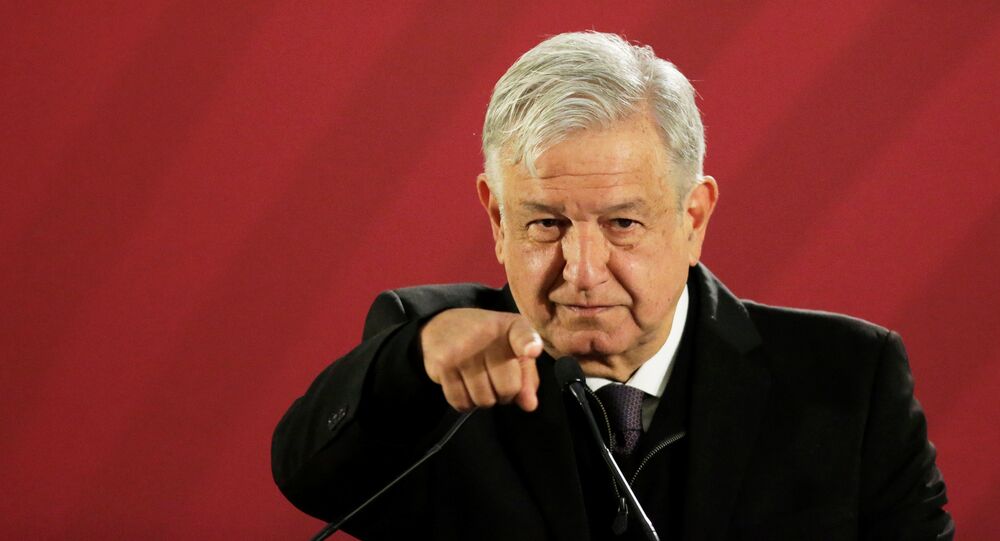 "There is no war. Officially there is no more war, we want peace and we will achieve peace," Obrador said at a press conference, stressing that "this is no longer the strategy of operatives to detain the gang leader".

According to the president, the government does not consider its main function to capture drug lords, but concentrates on ensuring public safety, and reducing the number of murders, robberies and kidnappings.

The war against crime, unprecedented in its intensity, began in Mexico in 2006 under then-President Felipe Calderon, who summoned army units for operations against drug mafia, reformed the Mexican federal police and announced a hunt for the most notorious leaders of the Mexican criminal world.

The successor to Calderon, Enrique Pena Nieto, continued the policy of his predecessor. Under his rule, the police killed or arrested a number of famous drug lords, including the head of the Sinaloa Cartel, Joaquin Guzman Loers, nicknamed El Chapo ("Shorty"). The trial against him is now underway in the United States.

© AP Photo / Guillermo Arias
US Southwest Border With Mexico 'Still Vulnerable' to Drugs, Illegals
According to the country's Civil Protection Ministry, a record 33,341 people were murdered in Mexico in 2018, making it the bloodiest year in over two decades. The previous record belonged to 2017 when 31,174 people were killed. This means that there were an average of 25 murders per every 100,000 people.The record-keeping reportedly began in 1997.

In particular, the small western Mexican state of Colima registered most murders per 100,000 residents, while central Guanajuato became the deadliest state with 3,290 total killings, according to the Mexico's official data.

One of the saddest pages in the history of the relationship between the Mexican state and the drug gangs is the story of the abduction and subsequent murder of 43 students from the city of Ayotzinapa. The tragedy occurred in September 2014 due to endemic corruption among police officials and the leadership of the city of Iguala, where students were detained by the police and handed over to the criminals who brutally killed them and destroyed their bodies in a garbage dump.

Mexico's then-President Pena Nieto put everyone involved in the abduction on their toes, and more than 100 people, including the former mayor of Iguala and numerous police officers, were detained as a result.

© AP Photo / Moises Castillo
Mexico Says Ready to Host Migrants Until US Courts Rule on Asylum Requests
The relatives of the abductees did not, however, believe the results of the official investigation and demanded that it be resumed. And they succeeded. Lopez Obrador has vowed to sign a decree on a special commission to investigate the Ayotzinapa case.

According to the US State Department's 2017 report on drug trafficking, Mexico is a key source and transit country for heroin, marijuana and synthetic drugs that arrive in the United States, as well as a primary transit country for South America's cocaine. The report noted that while Mexico was continuing its fight against international criminal organizations and reforming its judiciary and prisons, drug trafficking and related gang violence still posed a significant problem.

In 2018, the US government initiated a new multi-agency program to destroy one of Mexico's most powerful drug-smuggling gang dubbed Cartel Jalisco Nueva Generacion (CJNG).

The US Drug Enforcement Administration estimates that the CJNG, which reportedly emerged in 2011, exerts influence in 23 of 31 of Mexican states, including key drug production and transportation corridors using disciplined command and control and extreme violence, according to the release.

According to the US Department of Justice, the criminal syndicate is considered responsible for trafficking many tons of cocaine, methamphetamine and fentanyl-laced heroin into the United States and for violence and significant loss of life in Mexico. The US authorities have also reportedly detected cartel's operations in Europe, Asia and Australia.

© AP Photo / Eduardo Verdugo
New Drug Cartel Emerges in Mexico After El Chapo’s Extradition to US - Reports
In particular, the DOJ penalized in may 2018 subsidiary branches of Netherlands-based Cooperatieve Rabobank on the Mexican border for allowing criminal networks to use its system to launder "hundreds of millions of dollars in suspicious transactions likely tied to international narcotics trafficking, organized crime, and money laundering".

In general, the reported results of the ongoing fight against drug kingpins and local corrupt authorities have been slight so far, and public security in Mexico is still at issue. In addition, the problem with undocumented migrants who use Mexico as a transit country on their way to the United States has not helped the improvement of local security situation, since many of these refugees settle in Mexico due to Washington's tough immigration policies.