Venezuelan President Nicolas Maduro said Wednesday that a group of servicemen who arbitrarily left the Venezuelan army are conspiring in Colombia to sabotage Colombian armed forces.

"We are facing conspiracies and we are defeating them every day… a group of military deserters has become mercenaries of the Colombian oligarchy and conspired from Colombia to divide the national armed forces at my command", Maduro said Wednesday.

READ MORE: US Orchestrates Coup in Venezuela as Countries Take Sides on Uprising

Earlier in the day, in an exclusive interview with Sputnik Nicolas Maduro said that Trump had ordered the Colombian government and mafia to kill him in order to get access to the Venezuelan oil.

"If something happens to me, it will be Donald Trump and Colombian President Ivan Duque that are responsible for that," Nicolas Maduro told Sputnik. 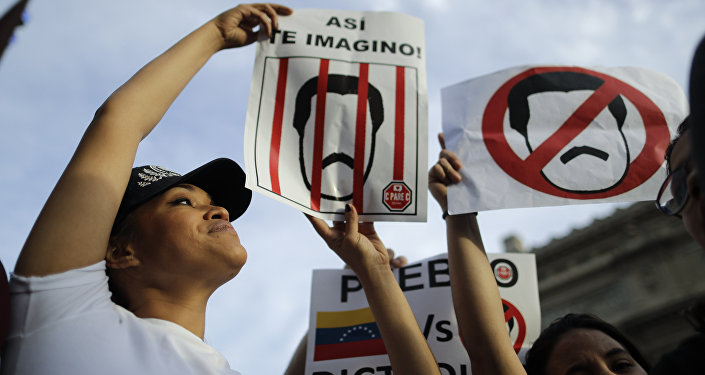 © AP Photo / Natacha Pisarenko
Venezuela Working to ‘Neutralise’ US as Driving Force Behind Coup Attempt - FM
Meanwhile, during a Monday briefing concerning new sanctions against Venezuela, including its state-owned oil and gas company PDVSA, Bolton was photographed holding a yellow notepad that read: "5,000 troops to Colombia." NBC News later reported, citing three defense officials, that no US troops were heading to Colombia or Venezuela. The Colombian Foreign Ministry later said that it did not know why such a note appeared on Bolton’s notebook.

Later on Tuesday, acting US Secretary of Defense Patrick M. Shanahan told reporters that he has not discussed with Bolton an apparent plan to deploy US troops to Colombia. 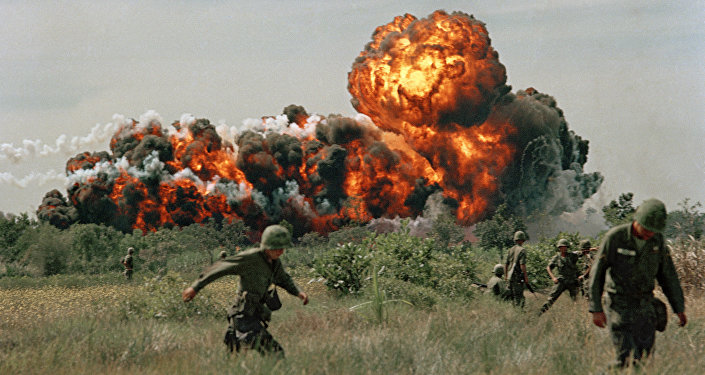 © AP Photo /
Venezuelan President: US Wants to Turn My Homeland Into Vietnam
US President Donald Trump did hint at the possibility of US military intervention in Venezuela back in 2017, and Bolton confirmed on Monday that "all options are on the table" in regard to Venezuela. However, the Colombian Defense Ministry told Sputnik that the country's government did not plan to provide the United States with military bases to invade Venezuela.

On January 23, the speaker of the opposition-led Venezuelan National Assembly, Juan Guaido, declared himself interim head of state amid ongoing anti-government protests. The United States and a number of other countries, which disputed last year’s re-election of President Nicolas Maduro, have recognized the opposition leader. Maduro slammed Guaido as a US "puppet" and accused Washington, which has stated that it has all options on the table to respond to the crisis, of organizing a coup in Venezuela.

Russia, China, Mexico, and Uruguay, were among those that voiced their support for Maduro as the country's only legitimate president and expressed readiness to act as mediators in the conflict between the government and the opposition.