Thousands of migrants from El Salvador and Honduras are heading en masse toward the US-Mexico border, seeking a new life and better opportunities, sparking a heating debate in the US over illegal immigration amid the upcoming midterm elections in the country.

Mexican authorities have identified and detained two suspects from a migrant caravan of would-be immigrants heading in the direction of the United States, the Mexican Interior Ministry said on Tuesday.

"The Mexican Federal Police and the National Institute for Migration identified two Honduran citizens, against whom valid arrest warrants had been issued for crimes related to murder and drug trafficking, they were returned to their [home] country," the ministry said in a statement. 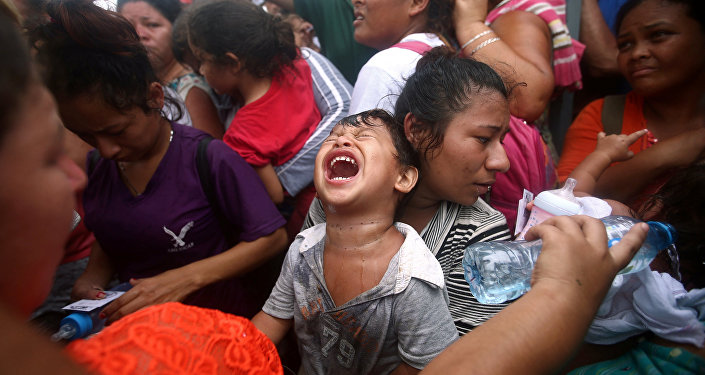 © REUTERS / Edgard Garrido
Children Trafficked in Migrant Caravan Rescued in Guatemala
The first caravan of illegal migrants set out from Honduras in the direction of Mexico and the United States on October 13, hoping to get asylum in these countries.

Meanwhile, on Tuesday, another large group of migrants from Central America began to arrive in the Mexican city of Tapachula in the state of Chiapas after passing through border control, according to media reports.

The US Department of Defense announced that the United States would deploy over 5,200 soldiers to the country's southwestern border with Mexico to bar these thousands of would-be illegal immigrants from entering the country.