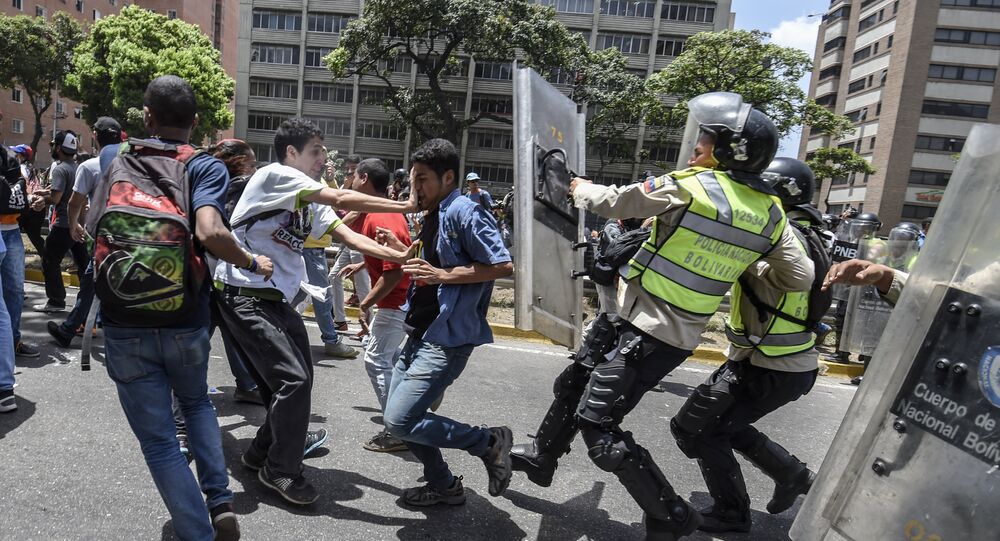 Human Rights Watch has released a 62-page report, “Crackdown on Dissent: Brutality, Torture, and Political Persecution in Venezuela,” that accuses Caracas of severe human rights violations against anti-government protesters and political opponents. The report was compiled in collaboration with Penal Forum, a Venezuelan human rights group.

Eighty-eight cases of abuse against 314 people have been reported by HRW. Reportedly, detainees have been tortured with electric shocks, asphyxiation, teargassing, starvation and dehydration, forced feeding of food "deliberately tainted with excrement, cigarette ashes, or insects," as well as rape and sexual assault. HRW wrote that the aim of this torment "was not to enforce the law or disperse protests but rather to punish people for their perceived political views."

Police have also violently assaulted and arbitrarily arrested opponents of the government of president Nicolas Maduro government in what HRW called the most severe repression in the South American nation in decades.

"The widespread vicious abuses against government opponents in Venezuela, including egregious cases of torture, and the absolute impunity for the attackers suggests government responsibility at the highest levels," said José Miguel Vivanco, Americas director at HRW, in a statement. "These are not isolated abuses or occasional excesses by rogue officers but rather a systematic practice by Venezuelan security forces."

"High-level Venezuelan officials bear responsibility for the pervasive, serious abuses being committed on their watch," Vivanco added, as the HRW report stated that Caracas has been complicit in hiding or downplaying these abuses.

"Key international leaders should send them a clear-cut message: if the Venezuelan government proves unable or unwilling to hold security forces accountable at home for the abuses, the international community will push for accountability abroad."

The violence was a consequence of the March dissolution of the anti-Maduro National Assembly by the pro-Maduro Supreme Tribunal of Justice, the nation's highest judicial authority. Thousands of protesters took to the streets and protests lasted until August. Protesters also railed against corruption, hyperinflation, and food shortages.

While some protesters were seen engaging in violence, such as throwing rocks and molotov cocktails at political opponents, HRW reports that the Maduro government's suppression "were not part of an effort to suppress violent demonstrations. Instead, the atrocities were inflicted on people in custody or otherwise under the control of security force personnel, or consisted of disproportionate violence and deliberate abuse against people at protests, in the streets, and even in their homes.

An estimated 160 people died during the protests, with an additional 5,000 arrests and 15,000 injuries. The Venezuelan government has denied any abuses, and claims that allegations made by rights groups as well as the US, UN, and EU were "baseless lies."

"The strategy used against my country from certain centers of power is a clear example of the use of human rights as a political weapon," Foreign Minister Jorge Arreaza told the UN Human Rights Council in September.

Despite mounting unpopularity and accusations of authoritarianism, Maduro and his Great Patriotic Pole (GPP) alliance have retained control of the presidency. The National Assembly, which is still controlled by opposition parties, was stripped of most of its power in favor of the Constituent National Assembly, which is entirely controlled by the GPP as opposition parties boycotted its creation.