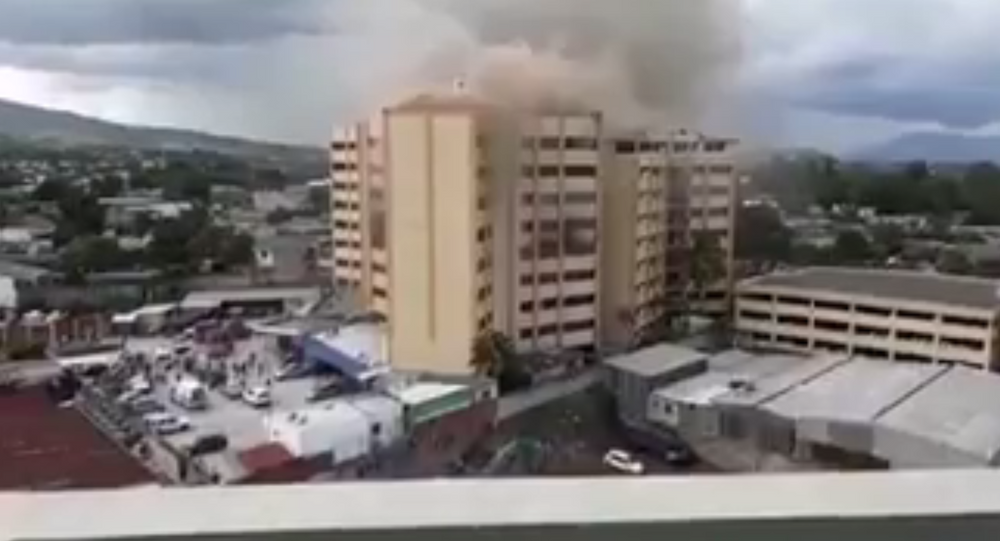 A major fire broke out at a building belonging to the Finance Ministry of El Salvador on Friday, trapping people inside the nine-story building. Three deaths have been reported by local outlets.

At least one person was reported to have jumped off the building in an attempt to escape the flames. It is unknown if they survived.

Three government helicopters were sent to rescue people trapped on the building's roof as thick plumes of smoke rose in the air around the ministry.

"We are going to send three helicopters, one of them with rescue capability to rescue the people at the top of the tower," Defense Minister Gen. David Munguia told local news. "The smoke is a problem for the helicopters, but we will try to fly to the side of the direction of the wind to be able to make this rescue."

A spokesman from the office of Salvadoran President Salvador Sanchez Ceren said that most people in the tower were evacuated without incident and that the flames have not spread from the building. Reuters reports that 50 people have been evacuated, and 25 have been taken to the hospital for treatment of burns and smoke inhalation. Local emergency personnel say that the tower has now been completely evacuated.

The building is located in the nation's capital, San Salvador, and is one of three towers that make up the Latin American nation's Finance Ministry. According to Minister of the Interior and Development Aristides Valencia, some 3,800 people were working in the Finance Ministry complex when the fire broke out and were evacuated.

Flood of Deportations From US Sparks Panic in El Salvador