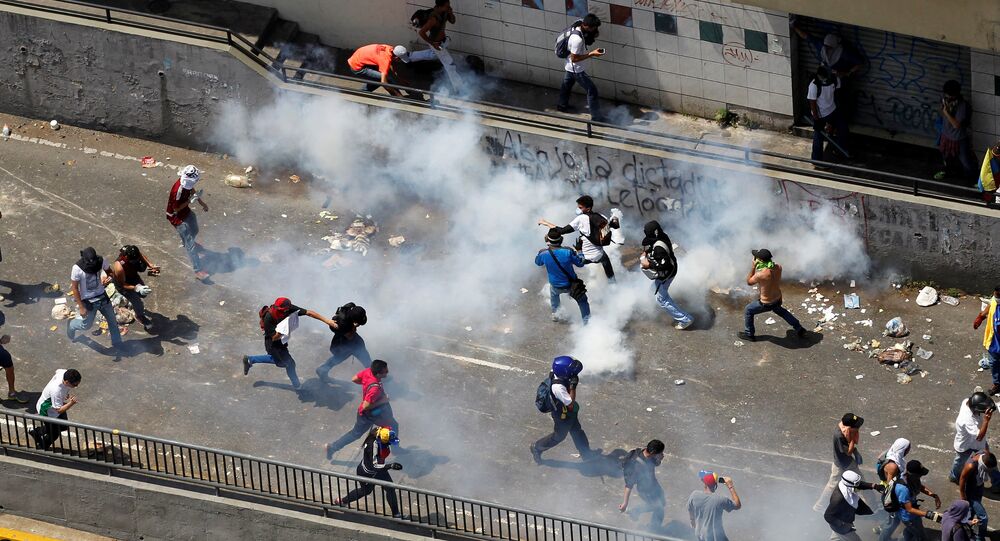 Violent confrontations during ongoing protests in Venezuela's capital city of Caracas, which escalated after one of the opposition leaders, Henrique Capriles, was banned from public office, will not contribute to the resolution of the political crisis, a spokesperson of the European Union External Action Service (EEAS) said Thursday.

© AFP 2021 / JUAN BARRETO
Venezuelan Police Use Tear Gas to Disperse Opposition Rally
MOSCOW (Sputnik) – On Saturday, Capriles announced that he been barred by the Venezuelan government from running for any political office for the next 15 years.

"Ongoing escalation of tensions and violent confrontations during last days are only increasing divisions in Venezuela. But violence and use of force will not resolve the current crisis," the spokesperson said in a statement.

The spokesperson added that sanctioning the opposition and banning Capriles from political life would "not lower the unrest" in the Latin American country.

The European Union has therefore called on all parties to "find common ground and end the violence."

Venezuela has seen a series of protests in recent days after the country’s Supreme Court attempted to take on the functions of the country's National Assembly controlled by the opposition. Despite the fact that the court's ruling has been canceled, serious tensions remain. According to media reports, protests continue in the country's capital.

On Saturday, media reported, citing the mayor of the Caracas municipality of Chacao, Ramon Muchacho, that at least 17 people were injured in confrontations with security forces in the capital city. According to the Latin American Herald Tribune, protesters were throwing stones at security forces, while authorities responded with water cannons and tear gas.

Chile Ready to Give Asylum to Venezuelan Opposition Figure