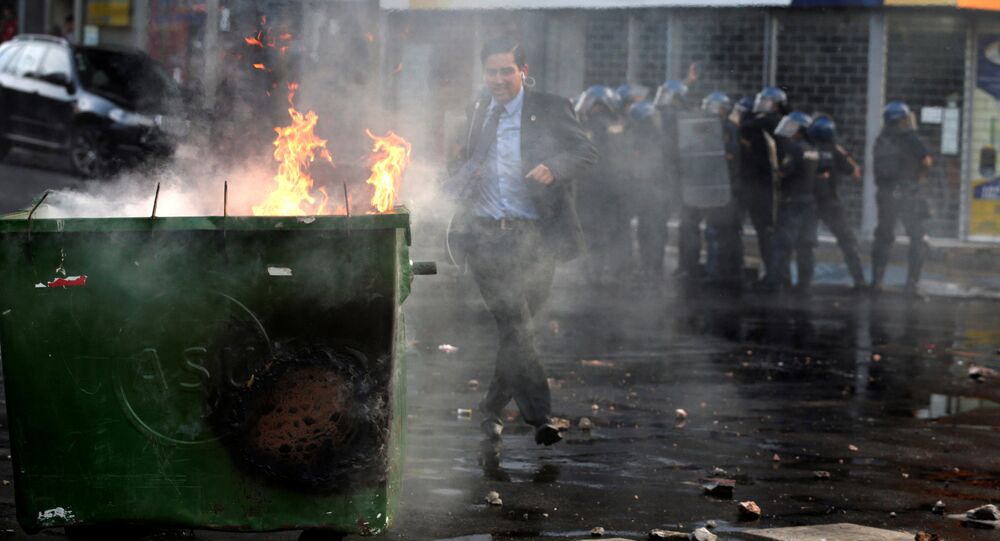 Paraguayan President Horacio Cartes has called on the country’s civilians to maintain calm in the wake of flareup of street protests following the approval by the Senate of a bill making it possible for the president to be re-elected for a second term.

MOSCOW (Sputnik) – In his address, Cartes warned civilians against committing acts of violence and bloodshed after protesters set the Congress building in Paraguay on fire.

"In the face of vandalism that occurred in the past hours at the headquarters of the National Congress, I urge citizens to remain calm and not let themselves be carried away by those who for months have been announcing acts of violence and bloodshed," Cartes said in a Friday statement.

As a result of breakout of unrest,several people, including one lawmaker, were injured. Police reportedly used water cannons, tear gas and rubber bullets against the protesters.

© CC BY 2.0 / Tetsumo
Paraguay Issues Alert Due to Alleged Assassination Attempt on President
"Democracy is not conquered or defended by violence and you can be sure that this government will continue to make greater efforts to maintain the legal order in the Republic. I call all my compatriots to dialogue and to respect each other in dissent," Cartes stressed late on Friday.

Earlier on Friday, Paraguay’s Senate approved an amendment to the constitution allowing the re-election of a president for a second term. The re-election was prohibited in 1992 and up until now, the leaders of the country were limited to a single 5-year term.

The constitutional amendment still needs to be approved by Paraguay’s Chamber of Deputies (lower house). If passed, it will allow President Horacio Cartes to run for re-election in 2018.