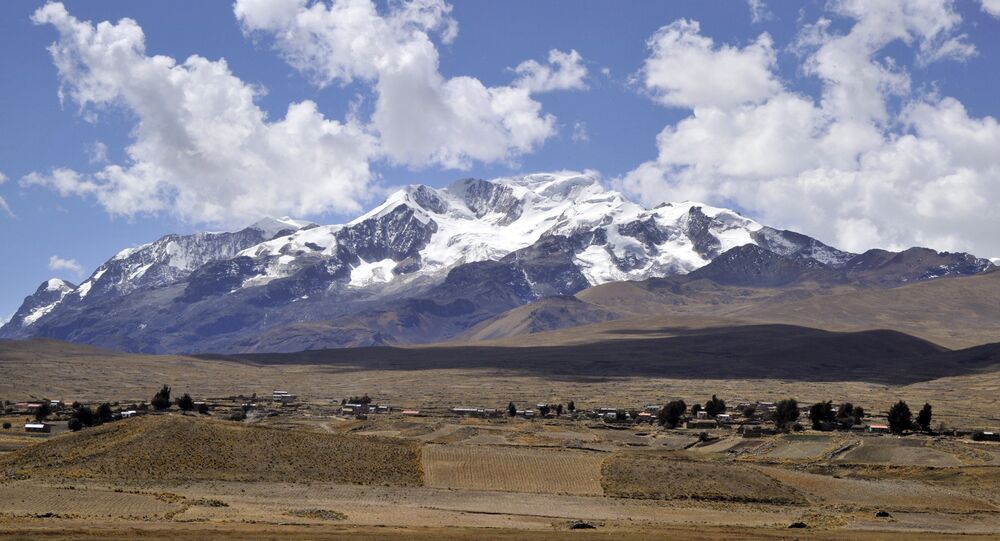 Glaciers in the Bolivian Andes have receded by 43% between 1986 and 2014. If this process is not stopped, the temperature in the region will continue to rise, leading to drastic consequences for the country’s agriculture, a new study says.

The glaciers in the Bolivian Andes are an important water resource for Bolivian cities and mountain communities. Their recession  can have a very negative impact on the environment in the country.

"Over the course of 15 years, temperatures have risen by 1.5-2 degrees Celsius. It can be felt across the country. What happens in the lowlands is directly related to high mountains. This significant temperature increase has provoked the melting of glaciers, which led to flooding in the lowlands and increasingly strong torrential rains that may last for several days," Miguel Ángel Crespo, the head of NGO Probioma told Sputnik Mundo.

© AFP 2021 / Arno Burgi
Giant Dino Footprint Found in Bolivia
A team of researchers measured the recession of glacier areas in Bolivia from 1986 to 2014 using satellite images made by the Landsat spacecraft used at USGS (United States Geological Survey, USGS) and NASA. The pictures showed that the area of the Bolivian Andes, covered with glaciers, decreased from 530 km2 in 1986 to just 300 km2 in 2014, namely by 43%.

In particular, this trend, accompanied by the development of proglacial lakes, could further increase the risks of flooding or drought in Bolivia, a study published in the scientific journal The Cryosphere says.

"Two years ago we had severe floods. Now we have permanent droughts. In recent months, we suffered from a long drought that destroyed agriculture and livestock. Because of it, we lost about 50,000 heads of cattle and 300,000 hectares of farmland. Financial losses are estimated at $700 million. Here they are, the consequences," concludes Crespo, Miguel Ángel Crespo, the head of NGO Probioma told Sputnik.

According to the study, receding glaciers also endanger the water supply. The melted water from glaciers is an important source of drinking water and hydroelectric power both for mountain villages, and big cities.