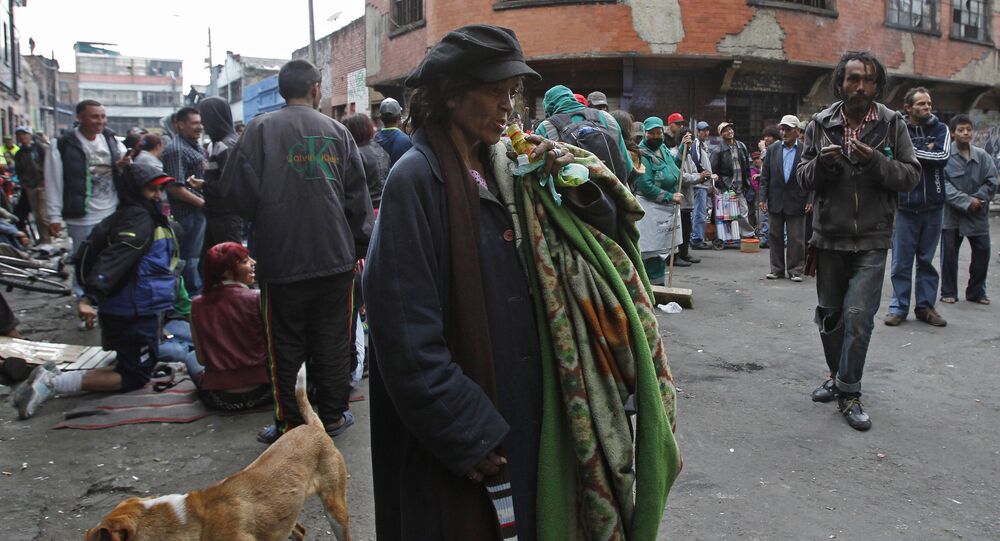 Bogota’s Bronx Street has seen a high level of crime for many years. Today, it is one of the most marginalized areas of Colombia’s Bogota as criminals have taken over the area. The Anne Frank NGO is at the front line of the fight for human rights in the district.

Bogota has a population of just under seven million. Four out of ten are juveniles. According to the latest population census, about half of all the homeless people live in the city center, with the remaining 30 percent living in areas adjacent to Bronx Street.

Since their opening, the organization began to receive applications from mothers searching for their missing daughters.

“When we began investigating, we found that the young women had been abducted on Bronx Street,” the organization’s director Claudia Quintero told Sputnik.

Anne Frank has carried out several rescue operations, and has been documenting a number of disappearances. The first victim found told the organization about all the cruelty she had to go through.

“We have classified her abduction as a crime associated with torture and human trafficking,” continued Claudia Quintero.

“Due to our persistence, the situation in the area has been made known to the general public. The majority did not believe in the existence of torture houses, mass rape, slavery, organ theft and children being exploited for drug trafficking among other things,” added Quintero.

On May 28, the police launched a crackdown on Bronx Street.

“Now, instead of one criminal area, we have a whole network of crime throughout the city. Everyone from victims to offenders was evacuated from the area. Today, they are all over Bogota,” reported Anne Frank’s officials.

“Only four thousand dollars were recovered. The female victims told us that the criminal’s earnings amounted to a million dollars per day. The police found just a few weapons, while our witnesses claimed that Bronx Street is a major arms dealing center. Police arrested three criminals, but we heard that there were at least 50 members and a few former militants in the criminal gang,” announced Anne Frank’s officials.

According to the Municipal Advisor Clavijo, police intervention led to clashes between local residents and the police. Many families fled in the direction of the Tunhuelo river channel.

Meanwhile, the Anne Frank NGO continues to fight for the declaring an emergency status in Bogota.

“Only by declaring emergency status will it will be possible to direct all resources to resolving the problem,” said Claudia Quintero. “At the moment, this is hell.”