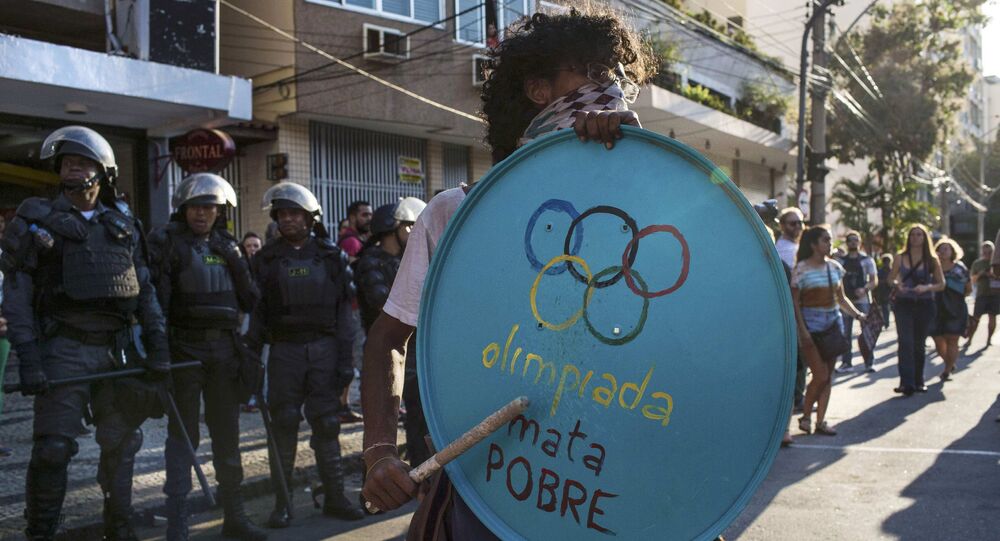 The legacy of the Rio 2016 Olympics has been shattered with at least eight people killed in police operations in the city during the Games and peaceful protests heavily repressed, according to Amnesty International.

© AFP 2020 / TASSO MARCELO
Protesters in Brazil Call for Using Olympics to Draw Attention to Coup in Country
MOSCOW (Sputnik) — Brazil has failed to uphold human rights during the 2016 Summer Olympics in Rio de Jaineiro, with police killing at least eight people and carrying out repressions against peaceful protesters during the Games, a human rights watchdog said Monday.

The 2016 Rio Olympic Games took place on August 5-21 in Brazil's second-largest city and concluded on Sunday.

"The legacy of the Rio 2016 Olympics has been shattered with at least eight people killed in police operations in the city during the Games and peaceful protests heavily repressed, Amnesty International said…Violent police operations took place throughout the Games (5-21 August) in several areas of Rio de Janeiro," Amnesty International said in a statement.

The death toll could rise further as information on shootouts in two more favelas is being verified.

Local residents also reported other human rights violations by the police, including home invasions, threats and physical and verbal aggression, the statement added, noting that at least two police officers were also killed during the first 10 days of the Games.

© AFP 2020 / JACK GUEZ
European Olympic Committee Head Transferred to Brazil's Largest Prison - Reports
A total of nearly 60 shootouts were registered in the city between August 5-12, Amnesty said, citing data from its Cross-fire application designed to monitor violence in Rio's favelas. This is almost double compared to the week before.

A number of repressions against protesters also took place. Over 100 people were detained at a demonstration on August 5, while others were forcibly removed from competition areas for displaying message of protest, Amnesty said.

"Brazil has lost the most important medal at play during Rio 2016: the chance to become a champion on human rights," Amnesty International Brazil Executive Director Atila Roque was quoted as saying in the statement.

Ahead of the start of the Games, the organization said that police killings doubled to 49 year-on-year in June.

Over the past year, the local public has been frustrated over Brazil's decision to host the Games as the country faced a pile of domestic problems, including the notorious Zika virus, President Dilma Rouseff's impeachment, and general economic decline.