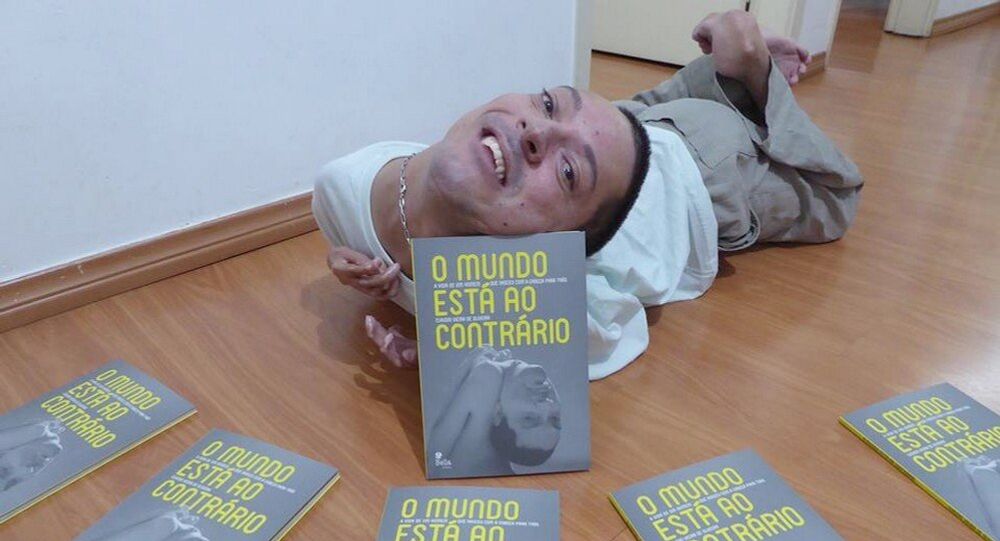 Brazilian author Claudio Vieira de Oliveira was born with his head at a 180-degree angle to his spine; he told Sputnik Brazil how he beat the odds to become a successful author, motivational speaker, and even work a day job as an accountant.

© Sputnik / Natalia Kupreychenko
Comic Book Legend Reveals True Nature of a Hero
Brazilian author Claudio Vieira de Oliveira was born with a rare congenital condition affecting his joints; his head appears to be upside-down, and when he was born doctors said he wouldn't live more than a day.

Against the odds, Claudio has learnt to do many of the things that able-bodied people take for granted, and has even written an inspirational book about his life experiences.

In an exclusive interview Claudio told Sputnik Brazil about his childhood determination to overcome his condition. At the age of seven he stopped crawling and started to walk, on his knees. Then he asked his mother to teach him to read and write.

"I gradually learned to keep balance, moving on my knees, and from that moment the victories came one after another. I started going to school, I asked my mother to take me to there," recollects Claudio, who is now 40.

"First, how to read my own name, then how to scrape something, holding the pencil in my mouth."

"To really learn to write was a victory, and since then I have not stopped," Claudio said.

After he learned to write, Claudio flourished academically and went on to study accounting and finance at university, 258km from home. He now works as a trade union secretary in his home state of Bahia.

Claudio paid tribute to his family and friends, and says that family support is vital to overcome difficulties.

Claudio, who has own Youtube channel, was recently approached by a publishing house to write his autobiography, and he was overjoyed to have the chance to tell his story to a wider audience.

The book is called "El mundo esta a contramano" (The world is the wrong way around).

Claudio told Sputnik Brazil that surgeons from the US and UK had recently approached him and offered to perform experimental surgery to try and straighten his shoulders, but he refused. The surgery is risky, and could leave him paralyzed.

"I don't really want to go through it, they want to perform and operation and try to change something. I am already 40, I came into the world like this, so this was meant to be, there is no need to try and change nature," Claudio explained.

"Science can be wrong, I don't really trust them. I am happy and fulfilled, and I have yet to conquer the world. What more could you want?"