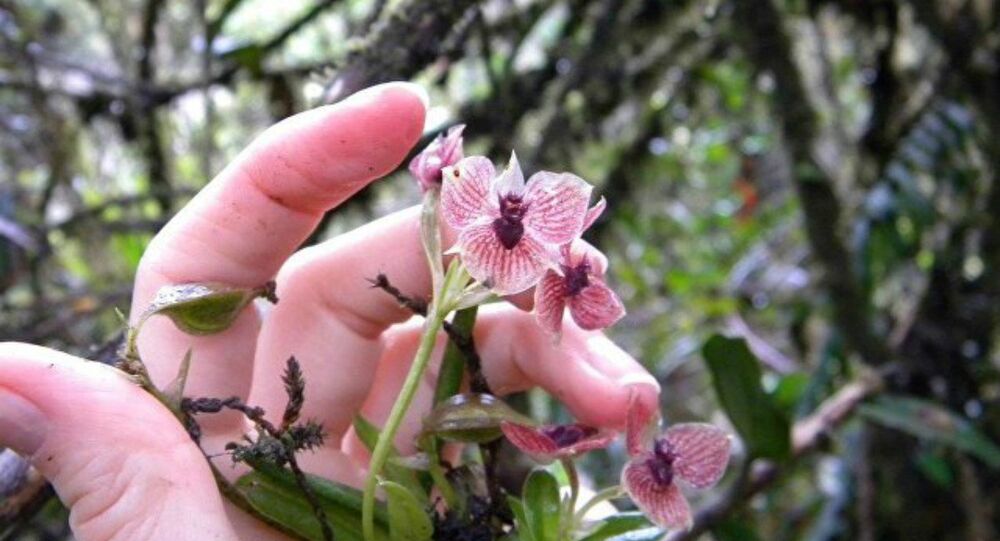 Rare flowers with hearts that look like miniature devils and with distinctly clawed petals have been discovered by researchers in a forest in southern Colombia.

Discovered by researchers from the Poland's University of Gdansk, Dr. Marta Kolanowska and Prof. Dariusz Szlachetko, the unique species of orchids was named after its demonic patterns — Telipogon diabolicus. A population of about 30 relatively small flowers was found growing on a small patch of land on the border between two Colombian departments, Putumayo and Nariño. Characterized by translucent clawed petals with reddish veins and a dark violet-maroon middle in a shape of beast's head, the plants are only about 10-15 cm high.

© Photo : Marta Kolanowska
Telipogon diabolicus
© Photo : Scott Kelly's twitter
Cosmic Flower: First Blossom in Space On Board ISS
"In the most recent catalogue of Colombian plants, almost 3,600 orchid species representing nearly 250 genera are included," said Dr. Kolanowska, the author of a study published in the botanical journal PhytoKeys. "However, there is no doubt that hundreds of species occurring in this country remain undiscovered. In 2015 alone, over 20 new orchids were published based on material collected in Colombia."

With its only known habitat restricted to a single population in the Colombian forest, the diabolical orchid was immediately assigned as a Critically Endangered species in the Red List of the International Union for Conservation of Nature. According to the scientists, the possibility of the species' extinction is quite high, as the Colombian government is building a new road in this area.